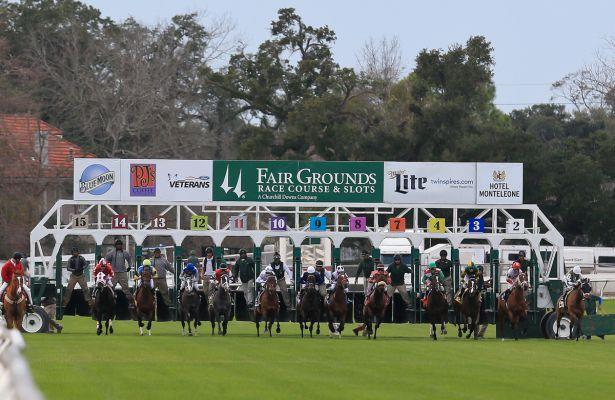 Florida-bred starter/claimer Gimmeadrink proved on Sunday that you can teach an old gelding new tricks when the 9-year-old son of Gimmeawink won on the grass in his first try over the surface. The victory was his 20th career win and first off the claim by owner-trainer Joe Sharp.

“I love horses like him,” Sharp said. “They’re just classy and know how to win.”

Ridden by C. J. McMahon, the bay gelding sat patiently in mid-pack before launching a sustained rally down the stretch that culminated in a 1¼-length win for his new connections. A raucous victory gathering swelled beyond the capacity of the winner’s circle afterward, resulting in the winner’s photo being taken on the track, itself.

“The turf race was more likely to go than the dirt race and the timing was good,” Sharp continued. “He would win on asphalt if you let him.”

Picked up last out at Keeneland for $7,500, the victory was Gimmeadrink’s first in his initial attempt at the Fair Grounds. In seasons past he was in the care of trainer Dale Bennett and raced mostly at Arlington, Tampa Bay Downs and Keeneland.

A beacon of consistency, the victory was the 40th time in 56 starts that the earner of $240,940 finished in the top three. It was his third victory and eighth top-three finish from 11 starts in 2016. A run in similar company next out is expected, according to his conditioner.

Bret Jones, Kent Spellman and Wes Welker’s Limitless, one of the most impressive debut winners last season, worked five furlongs in 1:00.60 for trainer Larry Jones. Unraced since a third in a Keeneland follow-up allowance effort at second asking, the daughter of Discreet Cat is slated to return in a Sunday Fair Grounds allowance.

Lightly raced stakes-placed turf sophomore Cordon blew out three furlongs in 36 flat for trainer Pavel Vaschenko and owner Glockenburg LLC. The son of Archarcharch will try to pick up a victory in a Thursday turf allowance.