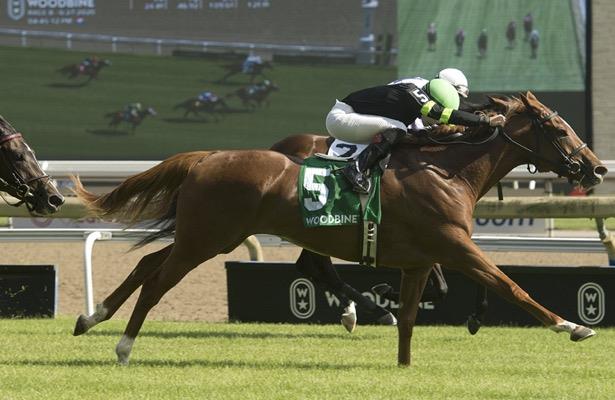 Elizabeth Way got up in the final strides to steal the spotlight in the Grade 2, $175,000 Nassau Stakes featured on Saturday’s program at Woodbine Racetrack.

Elizabeth Way was led along by pacesetter Another Time through a quarter in :24.41, half-mile in :46.92 and three-quarters in 1:09.61 before digging in down the stretch and getting up to collar the front-runner at the wire in 1:33.26.

Sent postward as the 5-1 fourth choice, Elizabeth Way returned $13.30 to her backers. Favorite Malakeh followed the winner’s cover and rallied home for third-place while Amalfi Coast closed from the backfield to finish fourth. Nantucket Red and Eyeinthesky completed the field. Lunar Garden was scratched.

A 4-year-old Godolphin-bred daughter of Frankel out of the Giant’s Causeway mare Maids Causeway, Elizabeth Way started her career in Ireland and ventured to Woodbine after making four starts in the U.S. earlier this year under Attfield’s care. Following a maiden-breaking score when trying 1 1/16 miles on the turf at Gulfstream Park, she won the Very One Stakes (G3) next time out in late February over 1 3/16 miles. Saturday’s victory was her third in 10 career starts and boosted her bankroll well over the $200,000 mark.

A confident Wilson, who studied replays and spoke with the chestnut filly’s trainer to determine the winning strategy, said she knew Elizabeth Way had a chance to catch the front-runner and was happy to have another horse lead her along throughout the race.

“Her form is all over the place – one minute she’s on the lead, one minute she’s at the back of the bus,” Wilson said. “Watching the replays gave me a real understanding as to what she needed to do.

“It was really about getting her into a good rhythm and that’s what Roger and I talked about as well. I got her out of the gate… and just got her happy into a rhythm and, you could see, she just galloped them down and she just kept on. She’s a stayer.”

The Nassau is the first leg of Woodbine’s Ladies of the Lawn Series, which offers $75,000 in bonuses to the top performers based on points accumulated in the designated graded turf routes for fillies and mares (10 points for first, seven points for second, five points for third, three points for fourth, two points for fifth, one point for sixth through last).

Wilson doubled up on the 10-race card as did Rafael Hernandez. Both jockeys are tied for the top spot in the 2020 standings with 15 wins through the first 12 race days.