Will the Sham be Washed Out Again? 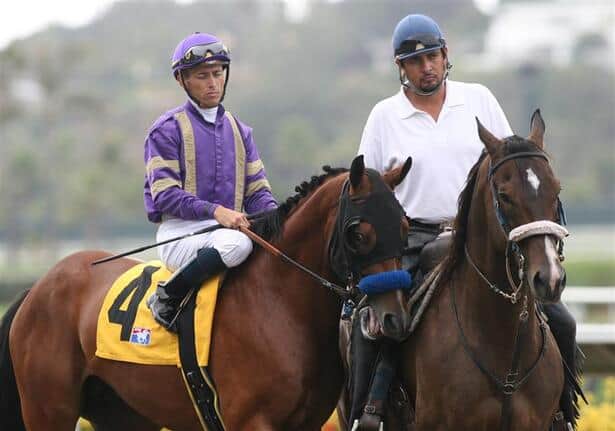 Marcello was added to Saturday's re-drawn Sham Stakes, but with forecasts of rain, will this Derby prep ever run?

Saturday's forecast for Arcadia, Ca from the Weather Channel's website:  Cloudy, periods of rain.  Chance of precipitation = 70%.  Highs in the low 60's and lows in the mid 40's.

Eight of Saturday’s 10 Sham entrants were originally engaged to run in the 3-year-old prep for the Santa Anita Derby last Saturday, including the race’s leading contenders. The Feb. 27 Sham was cancelled due to wet track conditions and rescheduled for Saturday. Run at the same distance as the April 3 Santa Anita Derby, the Sham has proven to be a useful tool in the advancement of promising youngsters.

Any of the entrants in this year’s Sham would need to take a large step forward to be considered a major factor in the Santa Anita Derby, but the race provided a solid foundation for fourth-place Giacomo in 2005 en route to his Kentucky Derby upset at odds of 50-1.

Machowsky already trains a Santa Anita Derby contender in the unbeaten California-bred Caracortado, but, with Nextdoorneighbor, he is optimistic about having a pair of runners in the Derby picture.

Nextdoorneighbor signaled his distance readiness by breaking his maiden by four lengths while running 1 1/16 miles in 1:43 4/5 on Jan. 24. A loser of his first two starts sprinting, the Florida-bred son of Lido Palace came back to prepare for the Sham with a blistering work of 1:10 3/5 for six furlongs on Feb. 15. Mike Smith will ride.

Baffert’s The Program, whom he trains for Thoroughbred Legends Racing Stable, is coming off a pair of solid efforts at 1 1/6 miles, a win and a third. He preceded those race by finishing 1 ½ lengths behind stablemate Lookin At Lucky, the Kentucky Derby Future Book favorite, when fourth in Hollywood Park’s Grade I CashCall Futurity at 1 1/16 miles last Dec. 19.

A son of Pleasantly Perfect trained by Mandella for Wertheimer and Frere, Setsuko has raced around two turns in his last five starts with a win, a pair of seconds and a pair of thirds. He is coming off a fast-closing second to Alfarabi when beaten by one-half length over 1 1/8 miles on turf on Jan. 27. Bejarano will be back aboard Setsuko. He also had been the rider of Nextdoorneighbor.

After finishing off the board in his sprint debut at Saratoga last summer, Kettle river broke his maiden routing on turf at Santa Anita last November before coming back with a solid allowance victory at 1 1/16 miles on Jan. 6. The Program finished third in that race. Brice Blanc rides the son of Congaree for Darley Stable.