Will the Real Giants Play Show Up in the Glens Falls? 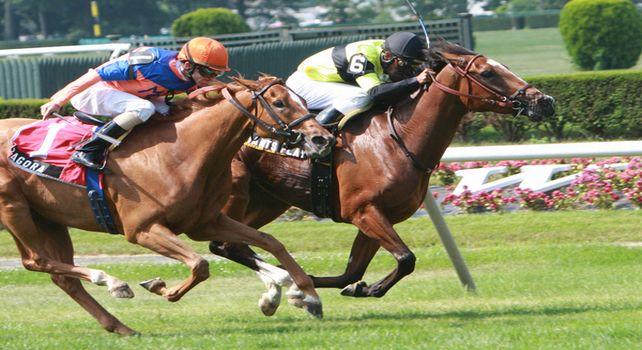 From first in the Grade 2 New York to last in her following start in the Grade 1 Diana, Giants Play has run, back-to-back, the best and worst races of her career.

On Monday, closing day of the Saratoga Race Course meet, the 4-year-old daughter of Giant’s Causeway, out of the famed broodmare Playful Act, will attempt to return to form in the Grade 3, $100,000 Glens Falls, a 1 3/8-mile grass race for fillies and mares on the inner turf course.

“She’s been very consistent but had a bad race in the Diana,” said Giants Play’s trainer, Christophe Clement. “Distance had something to do with that.”

Indeed, the 1 1/8-mile Diana was the shortest race of Giants Play’s career. Her victory in the New York at 1 ¼ miles came on the lead and was her first since breaking her maiden in Great Britain last September in the care of Sir Michael Stoute.

Since being transferred to Clement, Giants Play, 4-1 on the morning line, has hit the board in every start except for the Diana. She figures to stand a strong chance to make the pace in the Glens Falls, with most of the other entrants either deep closers or runners who prefer to race mid-pack.

Clement also will run Endless Expanse, 6-1 on the morning line, who finished seventh last out in the Grade 3 Modesty Handicap on July 9 at Arlington Park .

Meet-leading trainer Todd Pletcher will run Bubby Jane, winner of the 2008 Brazilian Oaks, who makes her second start for the barn. Last out, after a 14-month layoff, she finished second in the Grade 3 Robert Dick Memorial at Delaware Park . That race was run at the Glens Falls distance.

“We thought she ran a credible race off the layoff in the Robert Dick Memorial,” Pletcher said. “She’s probably the type that will settle mid-division and make a steady run.”

Pletcher said Bubbly Jane, 7-2, is the first horse he has trained for Haras Interlagos, a leading Brazilian breeding outfit.

Hall of Fame trainer Jonathan Sheppard has a serious threat with Emerald Beech, who has won three straight races, all at different distances, including the 1 ½-mile $75,000 Signature Stallions Waya Stakes on August 10.

Sheppard got the horse last year, when she was 4 years old, and ran her with little success. After a layoff between October and April, Emerald Beech returned a different animal.

“She was extremely high-strung and nervous when she came to us,” Sheppard said of Emerald Beech, 5-1. “Last year, she was kind of a work in progress. She was unratable on the lead in her [early] races in Canada . My goal was to try and change that, which you can’t do overnight.

“It was nice to give her a break over the winter… and when we brought her back in the spring it seemed like she had learned her lessons, not just mental but physical. I’m a slow learner; it takes me a longer time than others to figure out these horses.”

Prize Catch, a close-up fifth in the New York behind Giants Play, also will run. On August 6, trainer Angel Penna, Jr. ran the daughter of A.P. Indy in the one-mile De La Rose and she finished eighth of 10. Although Prize Catch, 12-1, has two wins at a mile on her résumé, Penna believes she would prefer to go longer.

“She’s not a world-beater, but she’s a nice filly,” Penna said. “The distance will help her a little bit and the soft ground will, too. Last time, the filly was so ready; she needed to run. She needed to let go and blow off steam. [The Glens Falls ] was the race I was pointing to, so she’s in good shape, and we’ll see what happens.”

Also in the field of 11 are: Senada, second last out Signature Stallions Waya Stakes; Dyani, third in that race; Zapparation, a troubled sixth most recently in an optional claimer July 30 at the Spa; Dynaslew, winner last year of the Grade 2 Ballston Spa; Gold d’Oro, and Ainamaa.

Dynazaper is entered as Main Track Only.