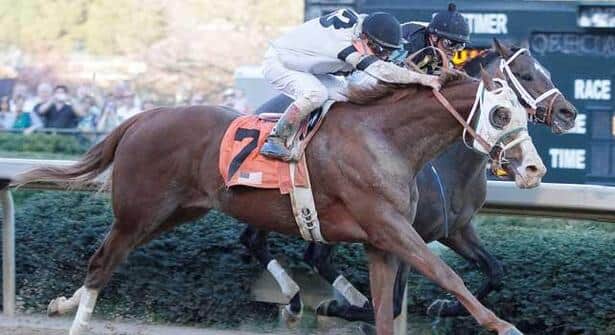 Smarty Jones Stakes winner Will Take Charge rebounded from a poor effort in the sloppy Southwest Stakes and came away with 50 points towards entry into the Kentucky Derby for his upset victory in Saturday’s $600,000 Rebel Stakes (G2) before a meet-high  crowd of 33,963.

While the pre-race talk had mostly focused on one Hall of Fame trainer’s dominance at Oaklawn, another Hall of Fame trainer was confidently conditioning his two locally based runners. In the end, it was D. Wayne Lukas, who finished first and second with Will Take Charge and Oxbow, while Bob Baffert was denied his fourth straight Rebel Stakes and fifth straight Oaklawn 3-year-old stakes when Den’s Legacy finished third and the 6-5 favorite Super Ninety Nine finished fifth.

The Rebel Stakes unfolded early as predicted with Title Contender going for the early lead and Super Ninety Nine in hot pursuit through fractions of 23 1/5 and 47 for the first half mile. The 6-5 favorite began to give way rounding the final turn and Oxbox picked up the lead after six furlongs in 1:12 1/5. The stablemate appeared to be on the way to victory until Will Take Charge, who had been racing in sixth place early, collared him in the final strides to win by a narrow head. The winning time was 1:45 for 1 1/16 miles over a fast track.

“I was feeling pretty good 100 yards from the wire,” said Lukas. “The competition was so tough. The hill gets a little steeper from this point.”

Texas Bling, who had finished second to Will Take Charge in the Smarty Jones, but who had also faltered in the Southwest, rallied late to be fourth. He was followed by Super Ninety Nine, Carve, Title Contender, Treasury Bill, Hardrock Eleven, Stormy Holiday and Delhomme.

Will Take Charge, who races for Willis D. Horton of Marshall, AR, improved his record to three victories from seven starts and has now earned $545,371. More importantly, the Unbridled’s Song colt increased his total Kentucky Derby points to 60 with his 10 points from the Smarty Jones and 50 from the Rebel. Overall, the Rebel offered 85 points based on Churchill Downs’ new criteria for making the 20-horse Kentucky Derby field. Oxbox received 20, Den’s Legacy earned 10 and Texas Bling got five.

Lukas said Mr. Horton would have the final say on whether or not Will Take Charge makes his next start in the $1 million Arkansas Derby (G1) April 13 and said the next time he would meet stablemate Oxbow again would be May 4 in the $2 million Kentucky Derby (G1).