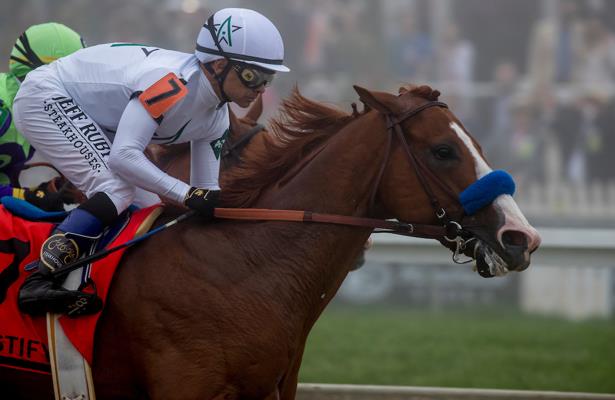 Justify's connections went out of their way not to mention a potential Triple Crown, as "it's one race at a time," Hall of Famer Bob Baffert often says. But leading up to Saturday's 2018 Preakness Stakes, Baffert openly likened his horse to his past trainee, American Pharoah, who in 2015 ended a 37-year drought between sweeps of the Kentucky Derby, Preakness and Belmont Stakes.

“What he has done since February, you have to be a superstar,” Baffert said of Justify, who's 4-for-4 since debuting three months ago. “He’s like Pharoah. They are superstars.”

Now it's time to ask: With the Belmont Stakes set for June 9, is Justify destined to claim one of his own?

• Since American Pharoah won his Belmont, the 2016 Derby winner Nyquist and 2017 winner Always Dreaming went without wins following their scores the first Saturday in May.

• Justify would be up against it at Belmont Park, as some promising runners who missed over the slop in the Derby are expected to return in the Triple Crown series' third leg. Among them, according to Horse Racing Nation's Stakes Tracker, are known late runners Hofburg and Vino Rosso, who should like the increased 1 1/2-mile distance.

Should Justify take the Preakness, he'd look to join this esteemed group:

Won Derby and Preakness, but not Belmont