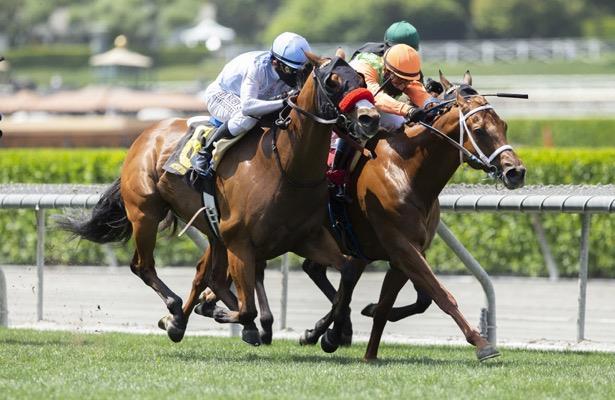 Wildman Jack needed every inch of the Daytona Stakes’ 5 ½ furlongs to score a victory Saturday in the Grade 3, $100,000 turf sprint at Santa Anita Park.

The Doug O’Neill-trained 2-1 favorite chased 70-1 longshot Sparky Ville the whole way before pulling even and getting the best of a photo finish.

The longshot nearly pulled the upset before Wildman Jack got up just in time, covering the distance in a snappy 1:01.01. He returned $6.20 as the winner, with Sparky Ville second in Stubbins settling for third after a crowded trip.

A post-race stewards’ inquiry lasted more than five minutes but yielded no changes to the final order.

Jockey Mike Smith piloted Wildman Jack, a W.C. Racing, Inc. homebred. The 4-year-old Goldencents gelding entered off a March 7 victory overseas in the Nad Al Sheba Turf Sprint (G3) and now has an American stakes win to his name too.

Smith’s victory was his fifth since Santa Anita resumed racing May 15 following a hiatus of nearly two months. The Hall of Fame rider credited his cardio work during the shutdown with his strong return to the races.