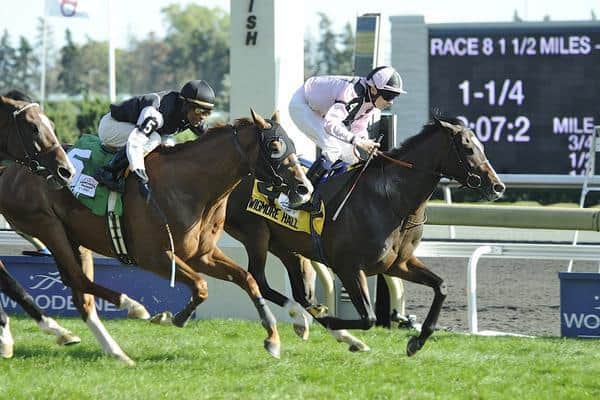 Imperial Monarch, Reliable Man, Joshua Tree and Wigmore Hall head a highly-competitive cast of 11 for the $1.5 million, Grade 1 Pattison Canadian International on the richest day of the thoroughbred racing season in Canada, Sunday at Woodbine.

In addition to the mile and one-half Pattison, Canada’s richest horse race, two other turf stakes will highlight the undercard - the $1 million, Grade 1 E.P. Taylor, at one mile and one-quarter for fillies and mares, and the six furlong, $500,000 Grade 1 Nearctic, for three-year-olds and upward.

All three stakes are also Breeders’ Cup ‘Win and You’re In’ races, meaning the winners earn all-expenses paid berths into their respective Breeders’ Cup contests, November 2 and 3 at Santa Anita in Arcadia, California.

The 75th edition of the International will go postward at 5:44 pm ET.  The Score will provide special two-hour live coverage across Canada of the racing extravaganza from Woodbine from 4:00 pm – 6:00 pm ET.  This marks the 10th year that Pattison Outdoor, Canada's largest outdoor advertising company, has sponsored Woodbine’s turf classic, which rewards the winner with $900,000.  All horses carry 126 pounds, except three-year-old Imperial Monarch at 119, and four-year-old filly Lay Time, at 123.

Summer Mortimer, Canada’s double gold medallist in swimming at the recent 2012 Paralympic Games in London, was the guest drawmaster when the post position draw took place Thursday at Woodbine.

Trainer Aidan O’Brien, who seeks a record-tying third International victory (which would tie him with Pete McCann, Horatio Luro and Maurice Zilber), after winning with Ballingarry in 2002 and Joshua Tree in 2010, is represented by Irish-bred Imperial Monarch (PP10, 3-1), a three-year-old son of champion Galileo.

Owned by Mrs. John Magnier, Michael Tabor and Derrick Smith, Imperial Monarch has been idle since winning the Group 1 Grand Prix de Paris, July 14 at Longchamp.   Since 1958, 13 three-year-olds have prevailed in the International.   Imperial Monarch, a winner of three in four starts, will try to win the race in just his fifth career outing, matching Phoenix Reach, the 2003 winner.   He’ll be ridden by champion jockey Ryan Moore for the first time.

“I think he’s had so little racing that he’s still learning (about a preferred racing style).  The last time, he made it (the pace).  It didn’t bother him,” said T.J. Comerford, assistant trainer for O’Brien.  “He’s got a great temperament.  I just hope we see him at his best on Sunday.   He’s been off (for three months) but at the same time, we’re getting him here thinking we’ve got him spot on.  He’s got loads of ability.  It depends on how competitive a race it is.”

British-bred but French-based Reliable Man (PP7, 4-1), a four-year-old son of champion Dalakhani, is a four-time winner in 11 starts, including the Group 1 French Derby in 2011 for trainer Alain De Royer-Dupre.   Although he hasn’t won in over a year, when taking the Group 2 Prix Niel, Reliable Man, owned by Fair Salinia, has been facing some of Europe’s best this year, finishing fourth to So You Think in the Prince of Wales Stakes in June, and fourth to last year’s Arc winner Danedream in July’s King George VI and Queen Elizabeth Stakes at Ascot.    Olivier Peslier, a four-time winner of the Arc, including this year’s shocker aboard 33-1 Solemia, will ride the career earner of over $1.6 million.

“(In the Prix Foy) I thought he was in very good form,” said Botti.  “He seems to be coming into his best recently.  I haven’t trained many horses as tough as he is.   He loves the travelling.  You put him on a plane and he seems to enjoy it.”

Legendary jockey Frankie Dettori, who was aboard Joshua Tree last time out, retains the mount as he seeks a third Pattison win, after victories aboard Mutafaweq in 2000 and Sulamani in 2004.   He’d join Robert Watson (1942-44) as the only three-time winning jockeys of the International, but the only one to do so since it became a turf race in 1958.

Joshua Tree, the field’s leading money winner with over $2.1 million, looks to become just the third horse since 1958 to win the International twice, joining George Royal (1965-66) and Majesty’s Prince (1982, 1984), in what will be his 10th start of the year in a busy campaign which began in Dubai in February.

Wigmore Hall (PP6, 6-1), owned by Mark Hawtin and trained by Michael Bell, successfully defended his title in the Grade 1 Northern Dancer here last month, holding off Pattison rival Al Khali by a neck.    The five-year-old gelded Irish-bred son of High Chaparral, the field’s second biggest money winner with over $1.9 million, also won the 2011 edition of the Northern Dancer by a neck and will once again be ridden by Jamie Spencer, who was aboard for both Woodbine wins.

“This (the International) will obviously be a better race,” stated Bell.  “But I think the environment there really suits him. He's also been given two really blinding rides by Jamie Spencer. We'll see how he gets on when upped in class.”

There will be three U.S. representatives in the Pattison – Air Support, Al Khali and Prince Will I Am.

Stuart Janney III’s homebred Air Support (PP11, 10-1), trained by Hall of Famer Shug McGaughey, comes into the race fresh from a score in the Grade 2, mile and one-quarter Bowling Green, September 8 at Belmont Park.   The four-year-old son of Smart Strike will be ridden by Javier Castellano, who notched the biggest mutuel upset in Pattison history, taking the 2008 edition aboard 29-1 Marsh Side.

Al Khali (PP9, 10-1), to be ridden by Garrett Gomez for Hall of Fame trainer Bill Mott, just missed to Wigmore Hall in the Northern Dancer and was a hard-luck fourth, just three-quarters of a length behind Joshua Tree, in the 2010 Pattison.   Owned by Brous Stable and Wachtel Stable, the seven-time winning six-year-old son of Medaglia d’Oro is approaching the $1 million mark in career earnings, with $967,234.    Gomez won the 2009 Pattison aboard Champs Elysees while Mott trained 1995 winner Lassigny.

Casa Farms I’s Prince Will I Am (PP5, 20-1), trained by Calgary-born Michelle Nihei, won the Grade 1 Jamaica back in 2010 and was also second in the 2010 Breeders’ Cup Marathon.   North America’s leading money-winning rider, Ramon Dominguez, will be aboard the five-year-old son of Victory Gallop, a 2010 inductee into the Canadian Horse Racing Hall of Fame.

The local contingent consists of a single entry, Forte Dei Marmi (PP3, 15-1), trained by dual Hall of Famer Roger Attfield.  Owned by Stella Perdomo, the British-bred six-year-old son of Selkirk, won the Grade 2 Sky Classic at Woodbine on August 19, before finishing third to Wigmore Hall in the Northern Dancer.   Recent U.S. Racing Hall of Fame inductee John Velazquez rides for Attfield, who has been second in the International on three occasions – with Spice Route in 2008, with Alywow in 1994 and Steady Power in 1989.

Group 1 winner Scalo (PP4, 12-1), trained by Andreas Wohler for Gestut Ittlingen, has been based at Woodbine since the early fall, finishing third to Forte Dei Marmi in the Sky Classic, then fourth to Wigmore Hall in the Northern Dancer.  The British-bred five-year-old son of German champion Lando will be ridden for the first time by Andrasch Starke, who won the Arc last year aboard Danedream.

British-bred Dandino (PP2, 8-1), a recent Group 3 winner over Kempton’s synthetic course for trainer James Fanshawe, makes his Canadian debut.  Owned by Elite Racing Club, the five-year-old son of Dansili is a seven-time winner in 20 outings and will be ridden by Jim Crowley.

Robert Barnett’s Lay Time (PP1, 20-1), trained by Andrew Balding, is the only filly in the field and will try to become the second consecutive female (and seventh overall since 1958) to win the Pattison, following in the hoofprints of last year’s winner, Sarah Lynx.   The four-year-old British-bred daughter of Galileo, once again partnered by Jimmy Fortune, is a Group 3 winner who finished a good fifth to the highly-regarded The Fugue in the Group 1 Nassau Stakes at Goodwood in August.   Balding trained 2003 Pattison International winner Phoenix Reach.

The stakes record for the mile and one-half over the E.P. Taylor Turf Course is 2:25 3/5 seconds, set by Juddmonte Farms' Raintrap in 1994.  The largest winning margin still belongs to the incomparable Secretariat, when 'Big Red' coasted home by six and one-half lengths in his farewell appearance in 1973. He is also the shortest-priced winner in history, paying $2.40.  Favourites have won the International 21 of 54 times (38.9%) since 1958, the last to do so being Champs Elysees, at 5-2 in 2009, and before him, Sulamani, the 4-5 choice in 2004.