Wicked Strong Blows Out for Travers 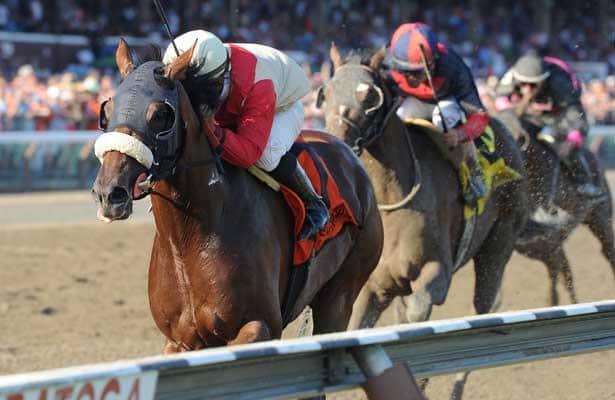 Winner of the Grade 1 TwinSpires.com Wood Memorial at Aqueduct and Grade 2 Jim Dandy on July 26 at Saratoga, Wicked Strong was timed in 38.69 seconds for three furlongs.

"It was good, just a basic little quarter of a mile," Jerkens said. "The track was flat and even, so it went good. We weren't looking for a whole lot, anyway, but he skipped over it and got a little something out of it."

Jerkens said he considered putting off the move until Friday but the ultimately stuck to his regular routine with Wicked Strong, the 7-2 third choice on the morning line for the "Mid-Summer Derby".

"It's not going to be any better tomorrow, so I figured we'd do it," Jerkens said. "He's been accustomed to doing it two days out. If he does it two days out and he does a little more than you expect or wanted him to do, at least he has another day to get over it. We decided to go ahead and do it."

Jerkens and his father, Hall of Fame horseman Allen Jerkens, typically give their horses a blowout leading up to races. The younger Jerkens had Curlin Stakes winner V. E. Day out for three furlongs in 37.70 seconds on Wednesday for Saturday's 1 ¼-mile Travers.

"Anytime you expand the lungs close to a race as grueling as that, I would have to think it would be beneficial as long as you're not overdoing it," Jimmy Jerkens said. "We always thought it just put the finishing touches on a horse's fitness. A lot of people don't even dream of doing it and do very well. We just feel a little more comfortable doing it."

Also on Thursday, Grade 1 winner Bayern, the 2-1 program favorite for the Travers, had his first look at Saratoga's main track since arriving from California late Wednesday afternoon.

The 3-year-old son of Offlee Wild jogged one mile and will gallop on Friday after the renovation break. Fiftyshadesofhay, pointing to Friday's Grade 1, $500,000 Personal Ensign, also jogged.

"He was going to do something light, anyway," said Jim Barnes, assistant to Hall of Fame trainer Bob Baffert. "Tomorrow, he'll gallop. The rain should go away and be a nice weekend."