Why it's unlikely that sabotage was involved with Medina Spirit 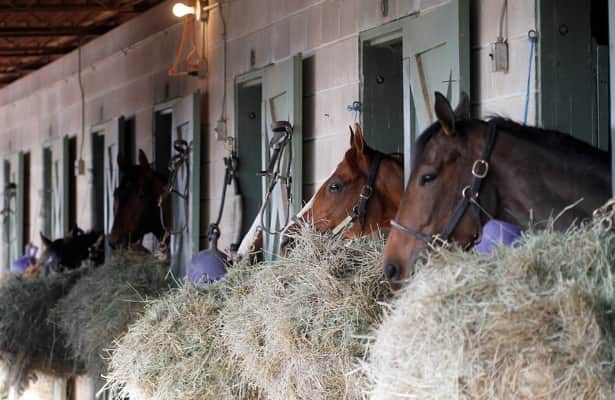 When Bob Baffert announced Sunday that his 2021 Kentucky Derby winner, Medina Spirit, tested positive for betamethasone after the race, he insisted that it did not come from within his barn.

“We did not give it,” Baffert said at Churchill Downs. “Medina Spirit has never been treated with betamethasone.”

And, he said: “I am not a conspiracy theorist. I know everybody is not out to get me, but there is definitely something wrong."

• How much can a few picograms of anything do to a horse?

If the second part of the split sample also detects the anti-inflammatory medication, could it have been sabotage?

Dr. Mary Scollay, executive director of the Lexington, Ky.-based Racing Medication and Testing Consortium, explained why that is unlikely.

For one thing, she said in a phone interview with Horse Racing Nation: "The Derby horses have got security on them 24/7, starting from the morning of entry," which this year was on the Tuesday before the May 1 race.

"But grooms are allowed to go in and out of the horses' stalls. So if there's a product that's got betamethasone that the groom is using and the groom is unaware of it – the security officers can't possibly police for that. They can prevent unlicensed people or unaffiliated people from coming in contact with the horse. But if the substance is in the barn, unbeknownst to the staff, how do you prevent that exposure? That's a question mark.

"Could somebody have nefariously contacted the horse? I think an exposure outside of Tuesday, unless somebody injected the horse, is doubtful. An oral exposure on Monday, I don't believe could result in positive tests. But to be honest, we haven't run that scenario. So I can't say for certain."

But, Scollay said, "you also have to ask yourself, if somebody were wanting to tamper with that horse, would that be the drug they choose? If you're trying to cause somebody grief, would you not – I mean, put yourself in the shoes of somebody who's got ill will, would you not want to consider a substance that would create more excitement if detected? And of course, something perhaps more nefarious than therapeutic medication?"

But it also is unlikely that a trainer would opt to use a medication such as betamethasone.

"Horsemen know that we can test for betamethasone. So why would you make a conscious decision to, air quotes, push the envelope with a medication that you know the lab can find? More times than not, by far, the wrong horse accidentally gets treated. The wrong horse gets the wrong feed tub. Somebody medicates the horse because they think it's not going to get entered and then the horse gets entered and the person who entered it didn't realize the horse has been medicated. It's error. That doesn't change the fact that the substance resulted in a violation, but it certainly speaks to a lack of intent."