Why don't they just get the test results before the race? 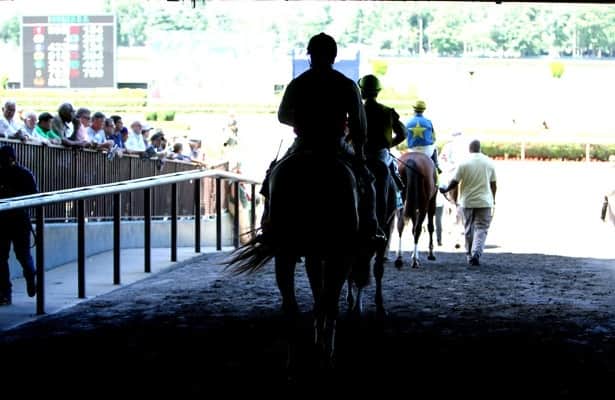 It was a week after the Kentucky Derby when trainer Bob Baffert learned that his winner, Medina Spirit, tested positive for betamethasone after the race.

He requested that the other half of a split sample be tested as well, and it will be another couple of weeks, perhaps, before the results from that test are known.

Why does it take so long? Why can’t the starters just be tested on the day of the race, with officials knowing they are clean (or not) before they get to the starting gate?

The simple answer is that these tests take time. But of course, the process is anything but simple.

First, a quick review of that Derby test. Baffert dropped the stunning news at his Churchill Downs barn on Sunday morning, saying that 21 picograms of the anti-inflammatory medication betamethasone had been found in a sample taken after the race. The results of a second split of that test sample have yet to be announced.

Baffert insisted on Sunday that “Medina Spirit has never been treated with betamethasone.”

But on Tuesday, Baffert said he had learned that the colt had been treated with an anti-fungal ointment called Otomax to treat dermatitis. Betamethasone is an ingredient in Otomax.

Meanwhile, Churchill Downs suspended Baffert, and there was the question of whether he would be allowed to enter Medina Spirit and Concert Tour in the May 15 Preakness Stakes and Beautiful Gift in the Black-Eyed Susan. He reached an agreement with the Maryland Jockey Club, allowing the organization to test those horses at their discretion, including upon arrival at Pimlico. An announcement about results of tests already taken on the contenders is expected Friday. There is more on the Pimlico testing below.

In Maryland, by the way, the threshold for betamethasone is 10 picograms per milliliter of blood; in Kentucky, any presence is a violation. (Baffert said Sunday that he believed the threshold in Kentucky was 10 picograms. That had been the case, but the level was changed to zero last year.)

Why it takes so long

Back to the question of why horses can’t be tested, and results known, on race day: “Pre-race testing on race day is not feasible,” Howard said.

“It takes time to set up the machines, to run them through some of these required chemical reactions that take time.”

“It's not like you go to your doctor and they just have a what we would call a snap test for a specific illness or they can just run a complete blood count and what would be called the chemistry panel,” Benson said. “Those are very simple, very automated processes. Between sample preparation and actually allowing the equipment to do its job, it is not a single-day process in the United States, and then you build in shipping time.

“There is not the ability to just walk the samples down to a lab on the track,” she said. “The labs are very sophisticated, they have to be very secure, they have to be well equipped with very expensive machinery, so to have one at every racetrack is just not realistic in the U.S.”

Scollay said that “if you could take them on a plane yourself and get them to the lab same day, there is a process that has to be gone through for the samples to be analyzed. … There's no way to do that – it's physically impossible to do it in a single day.”

But tracks don’t have labs on site. Churchill Downs generally sends its test samples to Industrial Labs in Colorado.

Howard explained the process: “Samples are sealed up and a courier comes. There's a chain-of-custody form that's followed, we have seals put on containers that they are shipped with. They get taken, and they're shipped overnight by air to the lab. When they arrive at the lab, they have a process to go through to make sure that the chain of custody is followed.”

The screening takes about four days, he said. “Just as an example, Sunday night's racing samples would be shipped out. And generally we will get a screening report back on a Thursday.”

Because of the complexities involved, not every horse is tested after a race in Kentucky – though at least two starters are always tested.

In Kentucky, “from every race that we run every day, the winner comes to the test barn and a minimum of one horse that they call a special,” Howard said. “The stewards will call us and tell us who the specials are going to be. Sometimes it's a second place horse – it can vary. Purses over $100,000 we get four horses total, so we get the winner and three specials. The last few years for the Derby, we've gotten the winner and four specials, we've tested five horses.”

“A lot of different parameters” can be used to determine the specials, Howard said. “Sometimes it can be the top two finishers, the top three finishers, a well-beaten favorite, a long shot that runs exceptionally well.”

You might recall Baffert saying that “out-of-competition” testing also had been conducted on Medina Spirit. This testing is different from that done after a race.

Betamethasone, for example, is a therapeutic medication that is allowed to be used on a horse – but it must no longer be present when the horse races.

As for the timing of out-of-competition testing, “Different states have different strategies to doing it,” Howard said.

“Some horses are tested more than than once. We will sometimes have other jurisdictions ask other jurisdictions to help. If a horse is not in Kentucky, and we know that they're coming to a high-profile race, I'll contact someone in another jurisdiction and give them a list of horses that we're interested in. And they'll collect samples for us and send them to the labs.

“And it's just kind of a variable spot check,” he said. “We don't have a set schedule of when a horse might be chosen to be sampled. And it tends to be more the high-profile races, but we can really, by the rule, we can test any horses that we choose.”

All of the Kentucky Oaks and Derby horses were tested, Howard said.

“The graded stakes, we aim to get a high percentage of those. And we will test ones a little bit more randomly on some of those other races. But for some of the big races and for Breeders' Cup, their aim is always that we test everybody.”

So how is Medina Spirit being tested ahead of the Preakness?

“Medina Spirit was tested on the Thursday prior to shipping from from Churchill (May 6),” Benson said. “And the blood sample was pulled by the regulatory veterinarians in Kentucky. And that was sent into the laboratory for the Maryland Racing Commission. And subsequently, when he arrived at Pimlico on Monday the 10th, the Maryland Racing Commission again pulled the blood sample on the horse. And then on Tuesday, May 11, the Maryland Jockey Club and 1/ST racing, we pulled a sample of blood on Medina Spirit."

Benson also said that all Preakness starters have been under security since they arrived at the stakes barn.

“We watch anytime a veterinarian goes into the stall with a horse, we have people who observe that. Investigators for the Maryland Racing Commission observe it, we have a private security firm that observes all of this also. And anything that is administered. So, for example, if the horse gets even fluids the Maryland Racing Commission will collect that fluid bag and maintain it under evidence so that they can test to see what was in whatever was given to the horse.

“Additionally, we've required medical records from all of the horses to be submitted for 14 days prior to arrival at Pimlico, and then anything that is done to them at the racetrack must be memorialized in the veterinary confidential. And those confidentials are submitted to the Maryland Racing Commission and their equine medical director has them for her review.

“So it's very controlled once they are inside of Pimlico racetrack – for every horse that is that is present on the track for the Preakness or the Black-Eyed Susan or even – we have a Grade 1 Arabian race, the UAE President's – all of those races. We observe any treatments and actually any graded stakes race, all of the treatments are observed and syringes are collected for previous weekend.”