Why O'Neill is 'optimistic' about Hot Rod Charlie, Louisiana Derby 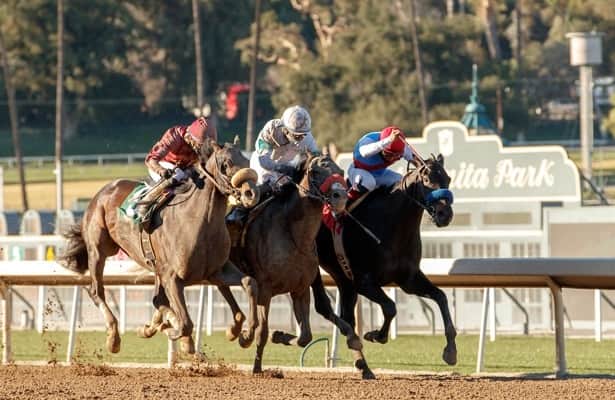 If Doug O’Neill shows up in the Big Easy, you had better take notice. The two-time Kentucky Derby-winning trainer has invaded Fair Grounds Race Course & Slots for major wins in the past decade and he’ll try again from his Santa Anita base in the $1 million, Grade 2 Louisiana Derby on March 20, when he sends Hot Rod Charlie in as a contender for the meet’s centerpiece race.

Owned by Roadrunner Racing, Boat Racing and William Strauss, Hot Rod Charlie brings serious credentials to the Louisiana Derby. He was second to last year’s 2-year-old champion Essential Quality in the Breeders’ Cup Juvenile in November at Keeneland. The son of Oxbow was 94-1 that day but came within three quarters of a length of pulling off one of the biggest upsets in Breeders’ Cup history.

Hot Rod Charlie has the pedigree to be a star, as he’s a half-brother to Breeders’ Cup Sprint winner and Sprint Champion Mitole, which gave O’Neill confidence going in to the Juvenile, even though his stable star had just a maiden win to his credit at the time.

“Him being a half-brother to a Breeders’ Cup winner like Mitole, we knew he had the class and the blood there,” O’Neill said. “He was training so well (going into championship day). He had routed well prior to going to Keeneland for the Breeders’ Cup. He was 94-1 but he looked 9-5 to us and it was a great effort and we were very proud of him.”

Hot Rod Charlie took the rest of the year off after the Juvenile and returned Jan. 30 in Santa Anita’s Robert Lewis (G3). He settled in fourth early and rallied nicely to finish third, beaten just a neck and nose behind the well-regarded Medina Spirit. Options are aplenty when you have a talented 3-year-old, but Fair Grounds and the Louisiana Derby made a lot of sense to O’Neill for a myriad of reasons.

“We love the spacing and of course the distance,” O’Neill said. “I love the long stretch there at the Fair Grounds, and the million-dollar purse doesn’t hurt either. A lot of it was the timing too; we have a little bit of flexibility too, with the six weeks (to the Kentucky Derby). All that went into play and we’re optimistic we’ll get a big effort from him.”

Hot Rod Charlie shows a strong series of works at Santa Anita since the Robert Lewis, including a 6-furlong move in 1:14.00 there March 6. O’Neill, who won the Kentucky Derby in 2012 with I’ll Have Another and in 2016 with Nyquist, knows there’s a balance between cranking up a horse too early in their 3-year-old season, which could leave the lemon a little dry come the first Saturday in May.

“We freshened him up a little bit (after the Juvenile) and he came back and ran a really tough race in the Bob Lewis,” O’Neill said. “From our experience, when you run that hard off the layoff, the best thing you can do is give them a little extra time before the next one. Just watching him train, he seems to get stronger as the distances go out in the morning.”

The Louisiana Derby is shaping up as one of the best renewals in years, with Mandaloun, Proxy,and Midnight Bourbon — the top three in the locally run Risen Star (G2) — all expected back, along with strong new shooters as well. O’Neill won the Risen Star in 2007 with Notional and Fair Grounds Oaks (G2) in 2017 with Mistical Plan and in 2016 with Land Over Sea, so he knows what to expect when he rolls into town.

“We know going to the Fair Grounds it will be some tall grass and it won’t be easy by any means,” O’Neill said. “The one good thing we know is Hot Rod Charlie can ship without a problem and fly to other places and run. The field is going to be tough, but for a million dollars you expect that. It’s exciting every time you get to run in New Orleans. There’s so much energy in the air. If you don’t like New Orleans, you don’t like life.”

The draw for the 108th edition of the Louisiana Derby (G2) will take place live on the Fair Grounds simulcast feed and via Facebook live on Saturday, March 13 at 12:30 p.m. EST.