Why Harpers First Ride has a shot at Pegasus upset 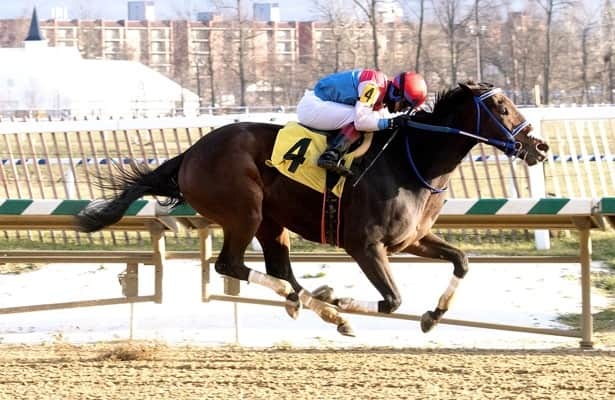 Gonzalez claimed Harpers First Ride for $30,000 on Sept. 14, 2019, out of a winning effort in a maiden claiming race at Churchill Downs largely because the horse was bred in Maryland and the trainer competes year-round at Laurel Park and Pimlico Race Course.

[RELATED: 3 reasons not to single Knicks Go in the Pegasus World Cup]

Harpers First Ride has made steady progress under Gonzalez, leading trainer for 12 of the last 13 meets in Maryland in a torrid stretch that began with Laurel’s 2017 spring stand. His former claimer will tackle Grade 1 company for the first time in the 1 1/8-mile Pegasus. He counts only one graded-stakes victory among his 10 wins in 17 career starts, that coming Oct. 2 in the Pimlico Special (G3).

On paper, Harpers First Ride faces a daunting task when he opposes far more accomplished foes in the Pegasus. Gonzalez, a cancer survivor, readily acknowledges that.

“He has to be a long shot. But you never know with the horses.

Lasix, also known as furosemide, has been used regularly to treat horses that suffer from EIPH (exercise-induced pulmonary hemorrhage). Gonzalez, like many others, has no idea how his horse will fare without it.

“Some horses have run their whole lives with Lasix. With the change, some horses can feel the difference,” said Gonzalez, adding, “he’s never run with no Lasix for me.”

Maryland’s leading trainer in victories each of the last four years has much to gain and perhaps not much to lose. At the least, a much larger audience is becoming familiar with him and his accomplishments during coverage leading up to the nationally televised Pegasus. He noted his desire to eventually expand his operation.

“Everybody wants to run here, New York and Kentucky,” he said during a phone interview from Florida. “I go step by step.” He ranked 11th nationally last year, with 152 victories.

Step by step has taken him to unimagined heights with Harpers First Ride, a newly turned 5-year-old. The gelded son of Paynter comes off a huge year in which he swept seven of 11 starts while banking $495,623 of his $573,055 career earnings.

He notched stakes victories in the Deputed Testamony, Richard W. Small and Native Dancer at Laurel. He achieved his lone graded-stakes triumph in the 1 3/16-mile Pimlico Special when he topped heavily favored Owendale by two lengths in that contest at Pimlico.

Gonzalez, 43, was pleased with everything associated with the most recent start. Harpers First Ride easily dispatched Forewarned by three-and-a-half lengths in the Dec. 26 Native Dancer. He completed the 1 1/8-mile distance in 1:48.56.

That performance also contributed to Gonzalez’s decision to accept a Pegasus invitation.

“The last time he ran, he still had something in the tank. When he got back after the race, it didn’t take too much from him,” he said.

Harpers First Ride shipped to Gulfstream Park on Jan. 11 to give him ample time to acclimate to much warmer weather and to a track that Gonzalez said is very different from the much deeper surface at Laurel.

“Up to now, he’s handling everything good, the weather and the track,” he said. “We’re OK.”

There was a time in Gonzalez’s life when he was not OK. He was diagnosed with testicular cancer in 2008, creating many anxious moments for him, his wife, Alejandra, and their family.

“When the doctor says you have cancer, you heard that word and it’s not a good feeling. You’re always scared when they say the word ‘cancer,’ " he said. “But the doctor explained to me we can be OK. I felt a little better, not completely.”

Surgery was followed by chemotherapy. Although Gonzalez knew no one could guarantee a full recovery, he portrayed a different picture to Alejandra.

After he successfully fought cancer, he and Alejandra added another member to their family. They have three children: Michelle, 17; Claudio, 15; and Alan, 7.

If Harpers First Ride can defy the odds and deliver Gonzalez his first Grade 1 triumph in the Pegasus, they will have even more to be grateful for.