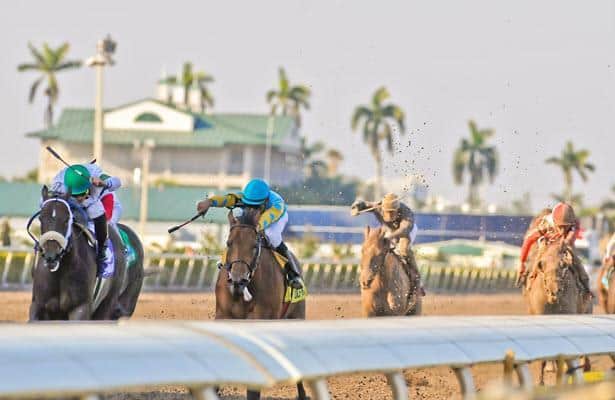 Attention is turning to the $3 million Pegasus World Cup on Jan. 29, the first Grade 1 feature of the year.

Conventional wisdom has it that you can expect Knicks Go and Life Is Good to square off in the 1 1/8-mile race at Gulfstream. Beyond that, it seems to be anyone's guess.

Knicks Go, last year's Pegasus winner and the all-but-official Horse of the Year, will make his final career start in the Pegasus. He finished 2021 by winning four straight graded stakes, including the Breeders' Cup Classic.

"I thought (Gulfstream) going a mile and an eighth, would benefit his style," Cox told the Gulfstream media team. "He runs the turns really well; we’ve seen that over the last year-plus. He does like that (two-turn) configuration of the mile and an eighth there at Gulfstream. Hopefully he'll get a good setup and be effective like he was last year. We know him a little better now than we did last year, and he’s been super consistent."

Life Is Good, beaten only once in his career, also is coming off a Breeders' Cup win, this one by 5 3/4 lengths in the Mile. Trainer Todd Pletcher won last year's Pegasus World Cup Turf with Colonel Liam but has not won the dirt event.

"He’s got a lot of brilliance. He’s got speed and the ability to carry it over a route of ground. He’s just a very, very talented, impressive horse," Pletcher told the Gulfstream media team. “We’re optimistic that he’ll continue to stretch out. He certainly trains like a horse that wants to go further. We’re excited about getting him back for next year.”

Fearless. He seems like a definite possibility, especially after his four-length win in the Harlan's Holiday (G3), a prep for the Pegasus World Cup. Fearless also is trained by Pletcher, and the trainer has listed Fearless and Life Is Good as under consideration for the Feb. 26 Saudi Cup, along with Happy Saver and Dr Post.

Regarding the Pegasus World Cup, “that’s all up to Todd,” said assistant trainer Anthony Sciametta told the Gulfstream media team after the Harlan's Holiday. “The horse is moving forward. He’s run two good races and come back good from his vacation. That’s all we can ask for.”

Brooklyn Strong. Another possibility. He is entered in the Alex M. Robb Stakes at Aqueduct on Friday, his first start since finishing fourth in Monmouth Park's Pegasus Stakes. "We will see how he runs," owner Mark Schwartz said in an email. "This is the first time he’s 100% healthy. We would definitely consider the Pegasus."

Mystic Guide. "Not a chance," trainer Michael Stidham told Horse Racing Nation. The soon-to-be 6-year-old has not raced since finishing second to Max Player in the July 3 Suburban (G2). After surgery to remove a knee chip, he returned to working on Dec. 12. Look for him to make his next start at Oaklawn or Fair Grounds.