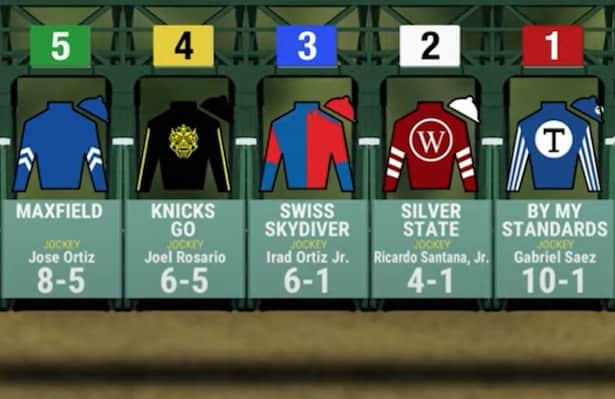 Looking for his first Grade 1 win since the Pegasus World Cup Invitational last winter, Knicks Go drew post 4 on Wednesday and was made the 6-5 morning-line favorite against Maxfield, Silver State, By My Standards and champion filly Swiss Skydiver in Saturday’s $1 million Whitney Stakes at Saratoga.

The 1 1/8-mile, no-Lasix race is an automatic qualifier for the Breeders’ Cup Classic.

After finishing fourth in both the Saudi Cup (G1) and Met Mile (G1), Knicks Go enjoyed a confidence boost in his 10 1/4-length triumph last month in the Cornhusker Handicap (G3). The 5-year-old Paynter horse was back on Lasix for that race after being off it for three consecutive starts – the two losses and his January victory in the Pegasus World Cup Invitational (G1).

“Once the gate opens, it’s up to Joel,” Eclipse Award-winning trainer Brad Cox said during NYRA’s draw presentation. “But that’s his weapon. It’s his speed, and we’re going to try to utilize it.”

With only one loss in his eight races, Maxfield (8-5) drew widest in the five-horse field and will make his first Saratoga start for trainer Brendan Walsh. Coming off a pair of Grade 2 wins at Churchill Downs, he might yet be favored for the seventh time in a row.

“He’s running the race that we’ve kind of circled on the map as being one of the major objectives of the year,” said president Jimmy Bell of Godolphin, Maxfield’s owner. “We’re happy to be here in the good form we are in.”

The 4-year-old colt by Street Sense is 5-for-5 with jockey José Ortiz. This will be Maxfield’s fourth consecutive race without Lasix.

Starting from post 2, Silver State (4-1) is the hottest horse going into the Whitney. Trained by Steve Asmussen, the 4-year-old Hard Spun colt has won all six of his starts since October, including the Met Mile (G1) last out June 5 at Belmont Park.

“We’ve been very high on him,” Asmussen said. “The surprises were when he didn’t have the success that we were expecting as a 3-year-old. The win streak that he’s on now, culminating with a very good run in the Met Mile, we’re obviously very proud of what he’s gotten done.”

Ricardo Santana Jr. has ridden all 11 of Silver State’s races.

Swiss Skydiver (6-1) was drawn into post 3. Originally scheduled to race July 25 against fillies and mares in the Shuvee Stakes, she was forced to wait through a quarantine brought on by a positive equine-herpesvirus test in a nearby barn stall at Saratoga.

Forced into an alternative plan, trainer Kenny McPeek decided to give his 2020 Preakness victor a chance to become the seventh filly ever to win the Whitney – and the first in 33 years.

“Unfortunately, the quarantine issue slowed us down a little bit,” McPeek said. “But she’s doing super. We’ve taken on the colts before, but certainly not older horses as established and talented as this group has.”

Reigning three-time Eclipse Award winner Irad Ortiz Jr. is expected to get the ride on the 4-year-old filly by Daredevil. Swiss Skydiver is 1-for-1 at Saratoga, having won last year in the Alabama (G1).

In his last start, By My Standards (10-1) was second to Silver State in the Met Mile. That was the first time trainer Bret Calhoun raced him without Lasix. Before that the 5-year-old horse by Goldencents ended a 1-for-5 slump with a narrow victory April 10 in the Oaklawn Mile. Regular rider Gabriel Sáez will be on By My Standards and start from post 1.

A welcome dry spell at Saratoga could be interrupted this weekend. The National Weather Service predicted a 40 percent chance of scattered showers and thunderstorms for Saturday afternoon.