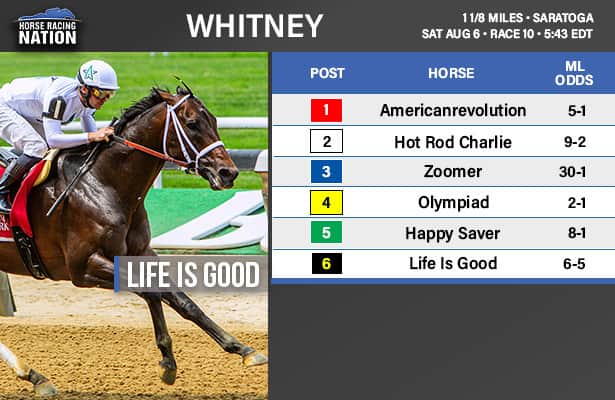 The Whitney Stakes at Saratoga on Saturday attracted a field of six older males from the dirt division. The 1 1/8-mile Grade 1 offers a $1 million purse and a “win and you’re in” spot in the Breeders’ Cup Classic.

Among the small but select field are four earners of at least $1 million and five Grade 1 victories.

Todd Pletcher has three horses entered this year as he tries to win the Whitney for the fourth time. The Hall of Fame trainer’s previous winners were Cross Traffic in 2013, Lawyer Ron in 2007 and with Left Bank in 2002. Their victories in the Whitney helped Lawyer Ron and Left Bank earn championships as the top older male horse.

Here is a full-field analysis for the Whitney with the official track morning-line odds. The Whitney is scheduled for 5:43 p.m. EDT and is carded as race 10 out of 12.

1. Americanrevolution (5-1 – Constitution – Todd Pletcher / Luis Saez – 9: 5-1-1 - $1,090,310) Since Americanrevolution won the Cigar Mile (G1) in December as a 3-year-old, he raced twice at Churchill Downs, where he was fourth in the Blame followed by a second in the Stephen Foster (G2). That was a noteworthy place finish behind Olympiad, who currently is riding a five-race winning streak that includes four graded stakes. Aside from the Cigar Mile, where Olympiad was fourth, all of Americanrevolution’s other victories were against New York-breds. The son of Constitution won his only start at Saratoga last summer in the Albany Stakes. Americanrevolution has stamped himself as a consistent performer, which means he might find his way to another top three finish. Owner Elliott Walden said he might only run if the track is wet. Use underneath.

Related: Americanrevolution may be scratched from Whitney

2. Hot Rod Charlie (9-2 – Oxbow – Doug O’Neill / Flavien Prat – 16: 4-5-3 - $5,151,200) Hot Rod Charlie lost a stretch battle to the always gritty Mind Control in his first start since racing twice at Meydan in Dubai. In the Middle East he won a Group 2 and then was second behind Country Grammer in the Dubai World Cup (G1). In the Salvator Mile (G3) at Monmouth Park, he had the lead in the stretch but lost by a head. This handicapper never expects horses to win their first start back in America after racing overseas, although Hot Rod Charlie fought valiantly. The son of Oxbow will need to be at his best to win against this Whitney field. His detractors will say that he created trouble for himself at times or that he has begun to pile up second-place finishes. Hot Rod Charlie’s career stats are impressive, with the most earnings in the field and only four finishes outside of the top three. Win contender.

Related: Can blinkers give Hot Rod Charlie an edge?

4. Olympiad (2-1 – Speightstown – Bill Mott / Junior Alvarado – 10: 7-1-1 - $1,407,560) Since the calendar turned to 2022 and Olympiad became a 4-year-old, he raced five times with five victories, beginning with an allowance at Gulfstream Park and then four graded stakes. Olympiad’s wins were remarkably similar, racing in second in the early stages and then taking control of the race at the beginning of the stretch run. Missing from the son of Speightstown’s resume is a Grade 1 victory. His only start at that level was in 2021, when he finished fourth in the Cigar Mile. Surprisingly, Hall of Fame trainer Bill Mott has never won the Whitney. Win contender.

5. Happy Saver (8-1 – Super Saver – Todd Pletcher / John Velazquez – 10: 5-4-1 - $988,300) Since Happy Saver began his career with five victories, including the 2020 Jockey Club Gold Cup (G1), the son of Super Saver has a third and then four second-place finishes. Three of those seconds were in Grade 1 races, with the most recent in the Met Mile (G1) behind Flightline but ahead of Speaker’s Corner. Happy Saver finds himself in another Grade 1 with a very tough field. He’s just $12,000 shy of becoming a millionaire earner and has never run worse than third, including in a pair of starts at Saratoga. Thus it is difficult to eliminate Happy Saver from a finish in the trifecta. Use underneath.

6. Life Is Good (6-5 – Into Mischief – Todd Pletcher / Irad Ortiz Jr. – 9: 7-1-0 - $3,551,700) Life Is Good has only two losses in his career, with one in the 10-furlong Dubai World Cup (G1) and the other by a neck to the top sprinter Jackie’s Warrior last summer at Saratoga in the seven-furlong Allen Jerkens (G1). Life Is Good won his only start at the 1 1/8-mile distance in the Pegasus World Cup (G1) in January at Gulfstream Park. His past performances show in nine races at six distances and at six racetracks, and he was on the lead right out of the gate and stayed there except for his two losses. He was odds-on in every start from his debut at Santa Anita as a 2-year-old to last month’s Nerud Stakes (G2) at Belmont Park. There is no reason to expect that the Whitney will begin any differently for Life Is Good. The one to beat.

Life Is Good and Olympiad are amazingly consistent, with running lines in their past performances that are the same, race after race. Life Is Good goes to the lead and Olympiad stalks from second. That sets up an intriguing matchup between the top two betting choices.

Olympiad will have to pass Life Is Good in the stretch to maintain his winning streak while trying to get the first Grade 1 victory in his career. When Life Is Good gets a comfortable lead and can control the race, he is very hard to beat.

Advantage in the Whitney goes to Life Is Good.