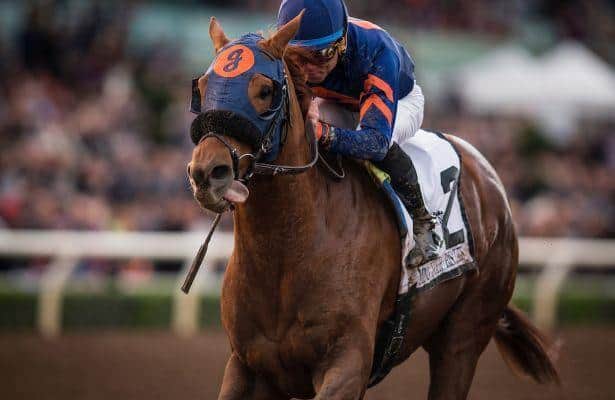 A race that marked a highlight for 2017 Horse of the Year Gun Runner could serve as a launchpad for another older runner Saturday when eight go postward in Saratoga’s Grade 1, $1.2 million Whitney Stakes.

It’s the New York-breds that bring the star power, with recent Suburban Handicap (G2) winner Diversify in along with Mind Your Biscuits, the sprinter stretching out off a near miss last out in the Met Mile (G2).

Here’s a look at the field with morning line odds:

1. Tapwrit, 6-1 (Tapit — Todd Pletcher/John Velazquez — 11: 4-1-1 — $1,267,402): Before Pletcher saddled this colt for the July 7 Suburban, he hinted that Tapwrit may not be completely ready second off the layoff. Consider this a true target race for last year’s Belmont Stakes winner, who in addition to the mile and a half has also won a graded stakes at 1 1/16 miles. Still, Tapwrit is an inconsistent sort. It’s also tough to look past off-the-board finishes in both his previous Saratoga starts. Likely a mid-pack runner early, he’ll have to show more late kick to factor. Could surprise third off the layoff.

2. Backyard Heaven, 9/2 (Tizway — Chad Brown/Javier Castellano — 5: 3-1-0 — $339,240): Owner Ken Ramsey envisions a Gun Runner-like race schedule for this one. Now he has to hope for Gun Runner-like results. Backyard Heaven — named for Ramsey’s Saratoga morning view of the training track — was given time to get over his issues at ages 2 and 3 before exploding onto the scene Kentucky Oaks day, winning the Alysheba (G2) at Churchill Downs. Back under the Twin Spires for the Stephen Foster (G1) a month later, he positioned well early but failed to fire. It was a sultry night, however, with many using the heat as an excuse. Given that, Backyard Heaven maintains a high ceiling. A pace stalking type looking to rebound.

3. Dalmore, 30-1 (Colonel John — Bob Hess Jr./Ricardo Santana — 22: 4-5-1 — $429,092): Now campaigned by Ron Paolucci and partners, the 5-year-old gelding looked like he may be developing into something special with a front-running, 8 1/2-length allowance win back on Feb. 15 for the former trainer Keith Desormeaux. A return to stakes company hasn’t led to replicating that effort. Last out, Dalmore set modest fractions in Prairie Meadows’ Cornhusker before caught late in the going. He’ll have more talented competition to tend to on the front end this time. Paolucci says they're sending. Adds to the pace, but not a huge threat.

4. Mind Your Biscuits, 2-1 (Posse — Chad Summers/Joel Rosario — 22: 7-9-3 — $3,939,286): The top sprinter, a repeat winner of the Dubai Golden Shaheen (G1) in March, will go a route of ground with Summers sensing there’s opportunity in the handicap division. Mind Your Biscuits is a closer around one turn, but may find himself near or on the lead going a similar pace at nine panels. The 5-year-old has worked as far as seven furlongs toward his stretch out. Now it’s all about going the distance. He’ll be bet down even as an unknown.

5. Discreet Lover, 30-1 (Repent — Uriah St. Lewis/Manny Franco — 41: 6-7-6 — $821,560): This heavily raced Florida-bred was third at odds of 41-1 in the Suburban, though still 8 1/2 lengths behind Diversify. Discreet Lover is likely to be the longest shot on the board but has been in decent form, finishing no worse than fourth in three previous races, which also included the Pimlico Special (G3) and Met Mile (G1). He's a closer who will be looking to pick up the pieces. Purely an exotics play, if that.

6. Diversify, 7/5 (Bellamy Road — Rick Violette/Irad Ortiz Jr. — 14: 9-2-0 — $1,309,425): Violette really stressed the decision to enter here or wait until the Sept. 1 Woodward (G1) off Diversify’s monster effort running 10 furlongs in under two minutes last out in the Suburban. To see him entered means the trainer is confident. This 5-year-old runs best in his home state and has won within the last year at a mile, nine furlongs and then the 1 1/4. In starts longer than a mile, he tends to set the pace but could have some classy company depending on how Mind Your Biscuits is positioned in the Whitney. He looks like the one to beat.

7. Good Samaritan, 12-1 (Harlan’s Holiday — Bill Mott/Jose Ortiz — 14: 4-3-2 — $1,258,316): Mott likes the way this one is working, important when the colt has run such a spaced-out campaign. Good Samaritan’s going on 15 months without a significant layoff but has run only 10 races over that span, with starts on dirt and turf. It speaks to soundness. His best recent races have come at 1 1/8 miles on the main track to boot. Good Samaritan won’t be anywhere near the front early, but could be best positioned to capitalize if the pace melts down. Brings in a solid closing kick.

8. McCraken, 15-1 (Ghostzapper — Ian Wilkes/Brian Hernandez Jr. — 14: 6-1-3 — $836,728): Since beginning his career 4-for-4, McCraken has won two of nine starts, both at Churchill Downs. That’s not to say he can’t perform outside his home track, but the 4-year-old perhaps hasn’t found his sweet spot in terms of class and distance. Campaigned as a Kentucky Derby contender, then shortened to a mile, he moved back to nine furlongs last out in the Cornhusker Handicap (G3) at Prairie Meadows. It yielded a third-place finish. Appears out-classed in this one.

Summary: It’s easy to make a case for any of Diversify, Mind Your Biscuits, Backyard Heaven or Good Samaritan here, and I prefer them in that order. With Dalmore in this field, however, there should be no easy lead, though these horses are talented enough to withstand some swift early fractions. It all seems to set up for Backyard Heaven if he’s as talented as Brown and Ramsey say, especially if Mind Your Biscuits gets involved in the going early as well. One word of caution: Ortiz Jr., who rode Backyard Heaven in the Stephen Foster, is sticking with Diversify.