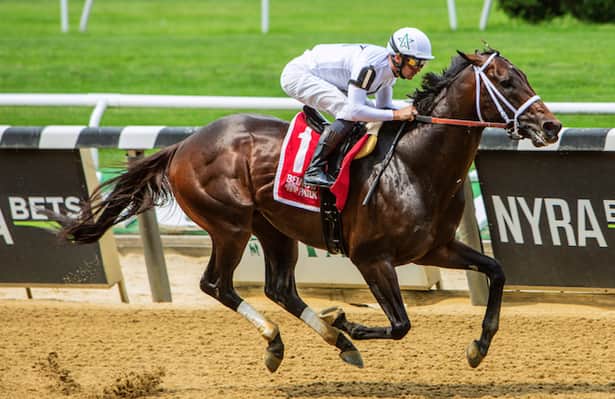 Hall of Fame trainer Todd Pletcher looks to add another chapter to what already has been a strong season by winning the Grade 1, $1 million Whitney Stakes on Saturday.

Pletcher went on to register his fourth Belmont Stakes victory when Mo Donegal and the filly Nest produced a memorable 1-2 finish. Nest would return to her own division to dominate Kentucky Oaks victor Secret Oath in the Coaching Club American Oaks (G1) in one of the most spectacular performances this season.

Now, Pletcher might be knocking on the door of a fourth Whitney triumph. When post positions were drawn Wednesday, he accounted for half of the six-horse field with Life Is Good, Happy Saver and Americanrevolution.

Life Is Good and Happy Saver form a dynamic duo in their own right. Life Is Good is a slight but deserving favorite at 6-5 ahead of streaking Olympiad, rated a solid 2-1 second choice for Hall of Famer Bill Mott. Olympiad has won all five of his starts this year.

Although Life Is Good weakened considerably to be fourth in the March 26 Dubai World Cup (G1), only his second defeat in nine career starts, he rebounded with an authoritative five-length victory against accomplished Speaker’s Corner in the July 2 John A. Nerud (G2) at seven furlongs at Belmont Park.

“We felt like we needed a segue from Dubai to the Whitney. Looking at the timing of it, the Nerud, spacing-wise, worked out really well,” Pletcher noted. “It gave him time to get over the Dubai trip and also it gave him good spacing to the Whitney.”

The 4-year-old son of Into Mischief will break from farthest outside for jockey Irad Ortiz Jr. “Hopefully, he’ll break like he normally does and we’ll be forwardly placed going into the first turn,” the trainer said.

According to Walden, the 1 1/8-mile Whitney was targeted as soon as the decision was made to keep the commanding winner of last year’s Breeders’ Cup Dirt Mile in training. “He’s a natural athlete, and they’re very hard to come by,” Walden said. “There are good horses and there are exceptional horses, and Life is Good is an exceptional horse.”

Happy Saver is exceptional in his consistency. Although winless in his last five outings, he has never failed to hit the board in 10 career races and will achieve millionaire status merely by competing in the lucrative Whitney with Hall of Fame veteran John Velazquez in the irons.

Although the 5-year-old Happy Saver can never be ruled out, it is disappointing that he has been unable to build on his success in the Jockey Club Gold Cup (G1) at 3.

“I think he needs to get the right trip,” Pletcher said. “(If) the pace scenario works out and he’s able to get a good pace to run at, then I think that would help him a lot. He’s a deserving winner of another Grade 1.”

Americanrevolution proved he belongs when he finished 2 1/4 lengths behind Olympiad in the July 2 Stephen Foster (G2). The decision on whether he goes in the Whitney might well depend on the weather. Showers are forecast for Friday with scattered thunderstorms expected on Saturday.

Americanrevolution excelled on a sloppy, sealed track at Belmont Park last Oct. 30, when he dominated fellow New York-breds by 11 3/4 lengths in the Empire Classic. At the same time, Walden wants to do everything possible to see that the spotlight shines brightest on Life Is Good.