Whitmore looking for first win of 2021 in Vanderbilt 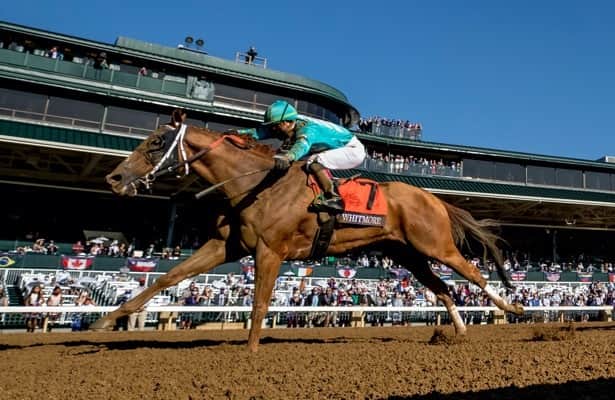 The $350,000, Grade 1 Alfred G. Vanderbilt Handicap Saturday at Saratoga will include the return of champion sprinter Whitmore, who has not raced since a third-place effort in the Churchill Downs (G1) on May 1.

The 8-year-old Pleasantly Perfect gelding took the extra time between starts because he has not been able to use Lasix in most stakes races this year, trainer Ron Moquett told Horse Racing Nation.

“He ran his entire career with and now we’re running without it,” Moquett said. “So we have to take extra precaution.”

Moquett said he was feeling good about Whitmore, who seeks his first victory of the year, going into the race, despite not having Lasix at his disposal for Saturday.

“I feel comfortable,” Moquett said. “He’s doing well. It’s a good group of horses, so we’re going to definitely need our A-game and we like where we’re at.”

Whitmore drew the sixth post in the nine-horse field for Saturday’s race, where regular rider Ricardo Santana Jr. will be in the irons. The gelding will face off against a field that includes Mischievous Alex, who starts second from the rail, and Firenze Fire, who lines up to his immediate outside in the third position.

Mischievous Alex enters the race having already won a Grade 1 this year, the Carter on April 1 at Aqueduct. He also won the Gulfstream Park Sprint (G3) in February and finished third in the Met Mile (G1) at Belmont in his most recent race on June 5.

Firenze Fire enters off a runner-up effort in the July 4 John A. Nerud (G2) at Belmont. Before that he earned consecutive stakes victories in the True North (G2) and Runhappy (G3), both at Belmont.

The 6-year-old Poseidon’s Warrior horse finished third last time he faced off against Whitmore in the 2020 Breeders’ Cup Sprint, a race Whitmore won.

Moquett said it will take a solid trip for Whitmore, who finished second in last year's Vanderbilt.

“There's some nice horses in there,” Moquett said. “We need some things to go our way and we’ll be right there with them.”

Moquett said his goal for Whitmore in 2021 is another try at the Breeders’ Cup Sprint, a race he won in 2020 on his fourth attempt.

“I hate to be cliche but with horses, you take it day by day and we do the same thing every year,” Moquett said. “We just work our way backwards from the Breeders’ Cup and after the race we’ll evaluate, see where we’re at and what we want to do next.”