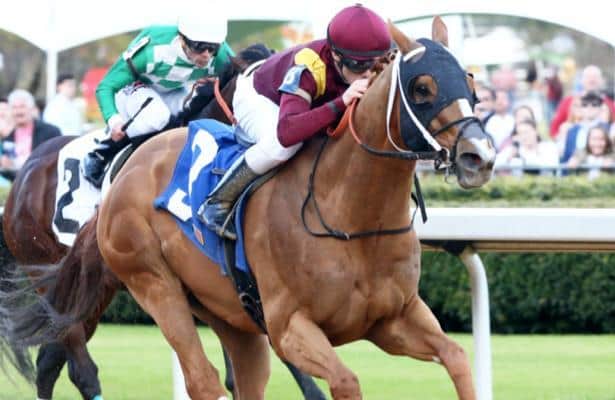 Whitmore will return Saturday to the site of one of his greatest victories and look to further stamp his legacy as one of the best sprinters of his generation.

“He feels good, he’s happy,” trainer Ron Moquett said Sunday. “We just need him to ship up well and train well into the race and get a good trip.”

Whitmore has chalked up a 34: 14-10-3 record, banking $3,146,350 for owners Robert V. LaPenta, Southern Springs Stables and Head of Plains Partners LLC. He’s taken his show across the country, winning or hitting the board in stakes at Belmont, Churchill Downs, Keeneland, Laurel, Oaklawn, Pimlico, Santa Anita and Saratoga.

In his only prior race at Saratoga, Whitmore won the Forego Stakes (G1) in August 2018 at 9-1 odds. That day, the gelding out-dueled heavily favored City of Light, a four-time Grade 1 hero.

“Oh, it was awesome,” Moquett said. “It was one of the highlights of my career, winning that race at Saratoga.”

Whitmore’s trip to upstate New York comes amid a season heavily altered by the COVID-19 pandemic.

The Churchill Downs Stakes (G1), typically run on Kentucky Derby day, is tentatively scheduled to instead take place this fall. Keeneland also did not host a running of the Commonwealth Stakes (G3) during its abbreviated July meet.

With no graded stakes for male sprinters on the adjusted Kentucky spring and summer racing calendar, Moquett entered Whitmore into a Keeneland allowance race July 12. The trainer then decided to scratch the gelding and instead point to the Vanderbilt.

Whitmore worked what Moquette called a “nice and smooth” four furlongs Friday in :49.40 at Churchill, his final timed prep for the six-furlong Vanderbilt. His competition at the Spa will include Grade 1 winners Firenze Fire and Mind Control and flashy rising star Volatile.

Moquette still has as Whitmore’s fall goals the Phoenix Stakes (G2) in October at Keeneland and then the Breeders’ Cup Classic over the same track Nov. 7. The trainer isn’t sure whether there’ll be a race for Whitmore between Saratoga’s Vanderbilt and Keeneland’s Phoenix.

“Everything he’s done for the last two years has been an extra blessing, you know,” Moquette said. “My partners and I, they’re really committed to letting him tell us how his career goes. He feels great and he’s training well, so we’ll let him run.

“The fact that’s he’s running at this competitive of a level is a testament to all the right decisions that they allowed us to make with him.”