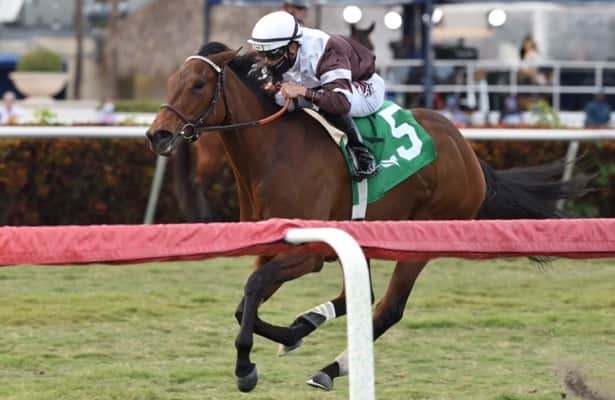 Gainesway Stable’s homebred White Frost made her sophomore and stakes debut a winning one, powering through the stretch to run down favored Con Lima for a one-length victory in Saturday’s Grade 3, $100,000 Sweetest Chant at Gulfstream Park.

The 26th running of the one-mile Sweetest Chant for 3-year-old fillies on the grass was the fourth of five graded-stakes worth $600,000 in purses.

Ridden by Junior Alvarado for Hall of Fame trainer Bill Mott, White Frost ($11) hit the wire in 1:34.45 over a firm course for her second straight win. The daughter of Candy Ride graduated with a 1¼-length maiden special weight triumph Nov. 21 at Aqueduct in her previous start.

“I thought Junior gave her a super ride out of there,” Mott’s assistant, Kenny McCarthy said. “I know beforehand, the boss mentioned that maybe (Con Lima) had the speed of the race and maybe (Lionessofbrittany) early, so the plan was to tuck in early on, save some ground and call on her turning for home and see if she had an answer. And, boy, she sure did answer.”

Breaking from Post 5 in the field of eight, Alvarado found himself between horses in the early stages trailing all but two horses through six furlongs as Con Lima, winner of the Ginger Brew on Jan. 1 at Gulfstream, ran splits of 24.16 seconds, 48.26 and 1:11.66 pressed by Lionessofbrittany, exiting back-to-back turf sprint victories.

“She broke very sharp. Going into the first turn, things got a little tight, but I had enough filly to hold my spot,” Alvarado said. “I was a passenger the whole way around. I just had to show her where to go and find the room turning for home. After I put her in the clear, she has such a nice turn of foot. It made my job very easy.”

Alvarado was able to weave his way through traffic until finding room at the head of the stretch, tipping out into the opening and setting his sights on Con Lima. White Frost steadily gained ground down the center of the course to reel in Con Lima, who was a length better than Domain Expertise in third, followed by Candace O, Honey Pants, Queen of the Green, Director’s Cut and Lionessofbrittany.

“It was pretty exceptional, because they hadn’t gone that fast early so, you figure everyone’s going to be running home a little bit,” McCarthy said. “Once Junior put her in the clear, she really accelerated and showed them a nice clean pair of heels.”