Which horse was fastest during weekend? (Hint: She’s a Lady) 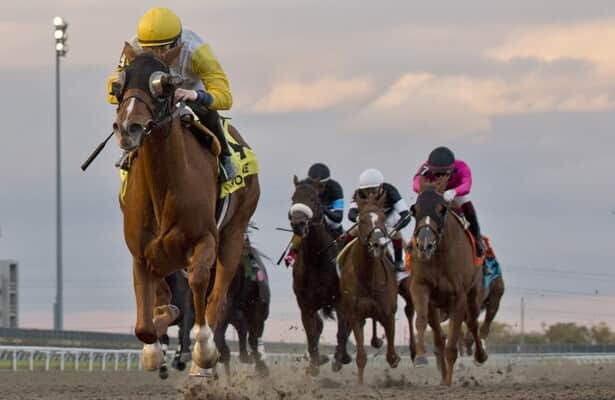 Lady Speightspeare’s victory Saturday in the Grade 2 Bessarabian Stakes at Woodbine not only kept her record perfect through four career starts, it held up under one optic as the fastest Thoroughbred performance of the weekend.

The filly’s four-length victory for dual Hall of Fame trainer Roger Attfield and jockey Emma-Jayne Wilson was rewarded by Daily Racing Form with a Beyer Speed Figure of 95. That was the highest among the winners of Saturday and Sunday stakes, according to a Twitter post from At the Races radio host Steve Byk.

Mandate, the 44-1 surprise who won the Artie Schiller Stakes for trainer Robert Johnston on Saturday at Aqueduct, earned a 94 Beyer, a 111 from Equibase and a 100 Brisnet Speed Rating. The upset came in the 4-year-old Blame gelding’s stakes debut. Mandate also received a 120.6 Brisnet Class Rating, the best of the weekend.

Candy Tycoon, a 4-year-old Twirling Candy colt who is trained by new father Norm Casse, got a 102 Brisnet Speed Rating for his allowance victory Friday at Churchill Downs, the best such number at that track last week. His 102 Equibase figure was the second best of his career, exceeded only by a 107 from an allowance victory in June at Monmouth Park.