Where are they now? Tracking 2017 Kentucky Oaks horses 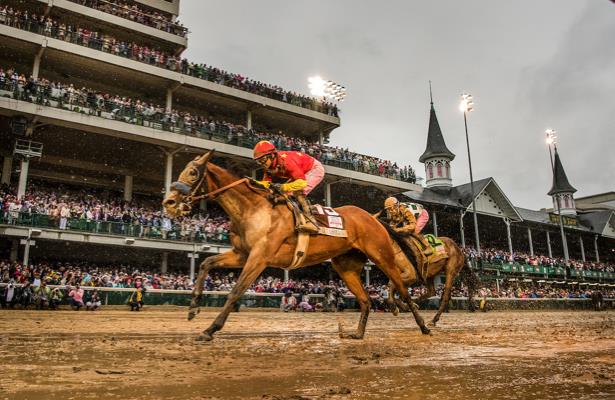 Abel Tasman’s runner-up finish in the Breeders’ Cup Distaff capped the second half of a 3-year-old season proving her Kentucky Oaks win was no fluke. But the Bob Baffert trainee isn’t the only contender from the first Friday in May to see more success in 2017.

Following an earlier glance at the Kentucky Derby field, we’ve done the same for the Oaks, also listing the fillies’ records since running at Churchill Downs:

1. Abel Tasman (4: 2-2-0) — She ran the gamut of Grade 1 races in her age group, also taking the Acorn and Coaching Club American Oaks. After Abel Tasman ran second to Unbridled Forever in the Distaff, trainer Bob Baffert said the daughter of Quality Road — the likely champion in her division — was due for a freshening but should race in 2018.

2. Daddys Lil Darling (5: 1-1-1): While not a graded stakes win, a victory over the turf in Kentucky Downs’ $200,000 Dueling Grounds Oaks in September provided the Kentucky Oaks runner-up a lucrative score. She’s back on the work tab at Keeneland following a third-place effort last out in Churchill Downs’ Grade 2 Mrs. Revere.

3. Lockdown (4: 0-1-1) — On the board at 36-1 in the Oaks, the result didn’t quite translate to a breakthrough moving forward. She posted finishes of second in the Grade 2 Mother Goose and third in the Grade 1 Cotillion before running fourth facing older in Keeneland’s Grade 1 Spinster. Lockdown posted one work after that but hasn’t been back on the tab since.

4. Vexatious (2: 0-0-0) — She raced twice more after the Oaks, finishing off the board in the Mother Goose and Grade 1 Del Mar Oaks, before shut down for the year. There’s been no word yet on whether the full sister to Creative Cause and Destin will race again.

5. Salty (4: 0-1-2) — She hit the board in three Grade 1 features following the Kentucky Oaks but tailed off with a seventh-place effort in Parx Racing’s Cotillion. Following a break, the Quality Road filly got back on the work tab last week at trainer Mark Casse’s training center in Ocala, Fla., breezing three furlongs as she rounds back into shape.

6. Sailor’s Valentine (0: 0-0-0) — The Eddie Kenneally trainee was listed over the summer as a possible entrant in the Grade 1 Acorn on the New York circuit. Ultimately, she didn’t race again following the Oaks, though Kenneally said she came out of the race well.

7. Tequilita (3: 1-0-1) — Off a win in the Grade 3 Charles Town Oaks, Tequilita ran once more in 2017, finishing fourth in Keeneland’s Grade 2 Raven Run as one of the top choices. Following the Raven Run, trainer Michael Matz said the filly was due for time off but is expected to race at age 4.

8. Miss Sky Warrior (2: 0-0-1) — She went too fast on the front end of the Grade 3 Turnback the Alarm in her return Oct. 28 at Belmont Park but looked more competitive next out, running third in the Grade 3 Comely on Nov. 24 at Aqueduct. The daughter of First Samurai has remained in training, relocating to Florida, where she’s working on turf for trainer Kelly Breen.

9. Ever So Clever (3: 0-2-0) — A drop from graded stakes company benefitted the Medaglia d’Oro filly after a sixth-place finish in the Iowa Oaks. She ran second in both the Remington Park Oaks in September and Zia Park Oaks in November. Steve Asmussen has her in training now back at Remington.

10. Mopotism (5: 0-2-0) — Still looking for a graded stakes score, Mopotism has remained in deep waters, trying the Grade 1 Alabama, Cotillion and Breeders’ Cup Distaff. Next for her is the Grade 1 La Brea set for Tuesday at Santa Anita Park. She’ll be a longshot cutting back to seven furlongs.

11. Paradise Woods (3: 1-0-1) — She’ll be a top choice, and maybe the favorite, for the La Brea, also headlined by Unique Bella, who missed the Kentucky Oaks due to injury. Paradise Woods faded to 11th as the favorite but came back strong with a victory in the Grade 1 Zenyatta at Santa Anita before she was third in the Breeders’ Cup Distaff.

12. Jordan’s Henny (4: 1-0-2) — With career wins at the maiden and allowance level, Jordan’s Henny jumped back into stakes company over the summer and hit the board in the Grade 3 Iowa Oaks. She also ran third in Churchill Downs’ listed Dogwood Stakes. The Michael Tomlinson trainee had a brief freshening before returning to the work tab in November. She’s now at Gulfstream Park.

13. Wicked Lick (4: 0-2-0) — A drop to allowance optional claiming company nearly got the maiden winner back on top Dec. 7 at Fair Grounds, as she hit the wire just a neck back of Miss Gracer. Wicked Lick also ran second at the same level by 2 3/4 lengths in her first start after the Oaks.

14. Farrell (2: 1-0-0) — The so-called queen of the Fair Grounds — she swept the Silverbulletday, Rachel Alexandra and Fair Grounds Oaks — is back in Louisiana for the winter, Trainer Wayne Catalano says “we’ll look at big races next year” with the Malibu Moon filly, who last time out won Churchill Downs’ Grade 2 Chilukki Stakes facing older for the first time.