How 5 insiders in Baltimore plan to bet Preakness 2021 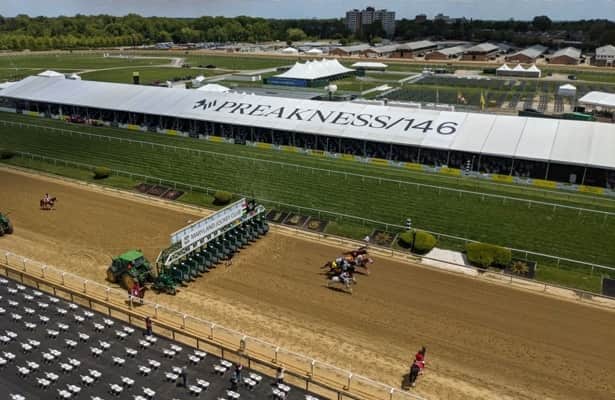 Even through the medication controversy swirling around Bob Baffert, the Preakness Stakes still boils down to deciding whether to bet into a short-priced favorite or chasing value.

Get Preakness Full-Card Picks from HRN

Racing insiders weighed in with their plans for betting the second jewel of the Triple Crown.

1. Medina Spirit. After trying to come up with an upset pick, I decided Medina Spirit is just too good for these. He consistently runs better speed figures than his opposition Saturday, and he should be able to get a good trip from an inside post.

3. Rombauer. He’s coming into the race with steady improvement, and his late running style could get him a piece.

My inclination is to go right back to Midnight Bourbon, who I keyed off of in Derby. He never really had a chance to make an impact. He is going to have to run better, but he gets Irad Ortiz Jr. I think he’ll sit a nice trip and maybe get the trip we were hoping for in the Derby. He’s obviously not going to be the price; he was half the price I was hoping for in the Derby.

Medina Spirit is going to run well, and he is absolutely the horse to beat. I know people seem to think that you go against him here, but I don’t know why that would be.

Both the Chad Browns – Crowded Trade and Risk Taking – have to be respected.

Of the newcomers I would expect Rombauer to run well. Michael McCarthy does a great job pointing for a race, and he’s had plenty of time to get him ready.

My play is somewhere in between there. Midnight Bourbon, Medina Spirit, either-or Chad and Rombauer in some combination.

My top pick is Midnight Bourbon. He has something that many of the 3-year-olds in this crop haven’t shown, and that’s consistency. It is unfortunate that the first time he finished off the board was in the Kentucky Derby, but after a poor break he was totally taken out of his comfort zone. He’s a high-energy horse, and it’s clear that Steve Asmussen and his team have worked hard with him in order to keep him under wraps as much as possible. While he has natural speed, I expect him to sit just behind the pace likely set by the two Bob Baffert runners. I have no concerns about the distance for this Tiznow colt who is beautifully bred, being a half-brother to graded-stakes winners Girvin and Pirate’s Punch.

Along with Midnight Bourbon, I think Crowded Trade is sitting on a big race. He is following the same trajectory as Chad Brown’s 2017 Preakness winner Cloud Computing, and while the added distance will be a bit of a question for him, I’ve liked the way he’s training coming in.

Concert Tour looks like a classic-distance type horse, and he will round out my trifecta.

In the Kentucky Derby, obviously John Velázquez gave another Hall of Fame ride on Medina Spirit, but with Concert Tour in the Preakness and the possibility that Midnight Bourbon is going to be keyed up with a clean start, I think the pace could be legit. In that case it’s possible that Medina Spirit will be vulnerable.

If you’re looking for a price, I would go for Crowded Trade. He comes in with very, very similar pattern as Cloud Computing did when he ran down Always Dreaming in the 2017 Preakness. If you believe there is going to be a due, and the pace is going to be quick, he could be your horse. He’s 10-1 on the morning line, and you are probably going to get every bit of that by post time.

My other scenario is after watching Medina Spirit gallop Thursday morning, he looked fantastic to me. I think he has improved each and every day he has been here. It could be a situation where Concert Tour grabs the lead, and he’s the rabbit. Obviously, Medina Spirit can track and wear him down. I’m always aware that he could just run not only a big race but also his biggest race. I have already mapped out 11 1/2 lengths, which is the margin of Smarty Jones in 2004. I keep waiting for that margin to be broken. It’s possible Medina Spirit could just surprise everybody and run the race of his life given all the news of the week and people second-guessing him. Those are my two strategies on the race. To either use him or don’t use him with Crowded Trade.

My No. 1 underneath, trifecta horse would be Rombauer. I know his Beyer numbers don’t stack up, but he’s a very, very steady horse. If you just watch his races, even when he’s finished second or third, he’s got grit. He tries to fight the other horse. It could be the kind of scenario where he may be beaten 7-8 lengths, but he’s going to fight that other horse down to the line to be in the bottom end of your trifecta and, with any luck, maybe even in the exacta.

I’m using Medina Spirit, but he’s not my top selection because of the setup. Midnight Bourbon might be more aggressive to make sure Concert Tour doesn’t get an easy lead. That might just be Medina Spirit’s game to play, hence Midnight Bourbon can sit behind and pick up the pieces if any of them engages in a speed duel.

In case everything collapses up front, there’s just plenty of closers that have the same running style. Keepmeinmind comes from behind. Ram can make that strong closing move. Rombauer closes. Unbridled Honor closes. Risk Taking closes.

I’m probably going to throw one of those in, but what is set in stone is that I want Concert Tour and Midnight Bourbon just from what they’ve shown me on track in the mornings.