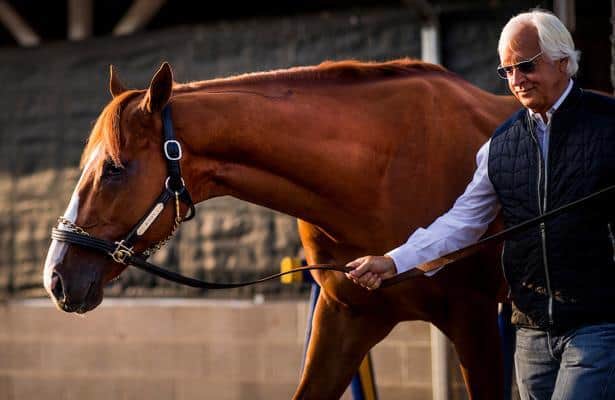 The RMTC, which domestically strives to develop and promote uniform rules for racing, and is chaired by NTRA President & CEO Alex Waldrop noted scopolamine is classified as a 4/C medication under the model rules of the Association of Racing Commissioners International.

The rating system's numeric scale (1-5) measures a substances' pharmacologic effect with 1 being the “greatest threat to the integrity of the competition” and 5 the lowest. The lettered scale (A-D) is the penalty designation with A being the most severe and D the least severe.

Class 4 is for “primarily therapeutic medications routinely used in racehorses. These may influence performance, but generally have a more limited ability to do so,” according to the ARCI model rules. Often with medications in this category, the amount found in a horse's system must be below a certain threshold because of the potential to enhance performance with greater doses.

The RMTC says that under ARCI model rules, “recommended penalties for a first time 4/C violation include a minimum fine of $1,000 (absent mitigating circumstances). In consideration of the facts of the case, the horse may be disqualified.”

While the language for Class 4 medications includes “routinely used in racehorses,” the RMTC in its statement noted scopolamine has had “limited historical use in equine veterinary medicine” to treat colic and intestinal issues. It is rarely if ever prescribed, as “potential toxicity and the development of safer, more effective medications have rendered its use as a therapeutic medication obsolete.”

The RMTC also pointed out scopolamine is an alkaloid in the poisonous plant species Datura and is found in Jimsonweed, which “infests crops fields throughout North America and the world.” Jimsonweed is said to have a strong odor and bitter taste that animals tend to avoid its consumption.

Yet the presence of Jimsonweed in crop fields means it can still make its way into a horse's system, the RMTC noted, and that is the explanation trainer Bob Baffert and his attorney offered when explaining Justify's positive test.

“Scopolamine has been detected in the blood and/or urine of animals having consumed hay containing Jimsonweed, as the odor and bitter taste dissipate during the hay curing process. Symptoms of scopolamine toxicity include dilated pupils and intestinal paralysis, and can persist for several days following ingestion.”

Craig Robertson, Baffert's lawyer, denied there was any intentional administration of scopolamine, noting “it defied logic and common sense” given the substance's depressant effects.

According to the RMTC, scopolamine (known as hyoscine) is “conventionally” prescribed to humans to prevent motion sickness and is administered either by tablet or transdermal patch.

Separately this week, ARCI called for the California Horse Racing Board in this instance “to release to the public as much information about why the recommended penalty mitigation was justified in order to lay to rest questions concerning this matter and to reinforce public confidence in its actions.”

"I was confident that Mr. Baffert would ultimately prevail if the CHRB pursued the matter," Robertson said. "This left the CHRB with two choices -- either pursue a frivolous case that had no merit at great taxpayer expense, or exercise reason and common sense and decide to take no further action.

"The CHRB made the wise decision and should be commended, instead of attacked, for doing so."

CHRB officials have said other horses from barns other than Baffert's tested positive for scopolamine around the same time, and that those cases were also dismissed due to the belief they were caused by environmental contamination from jimsonweed.