Next for Santa Anita winners Life Is Good, Idol ... and others? 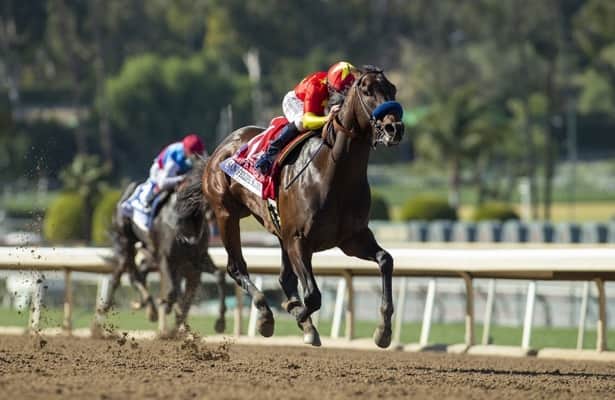 Both Life Is Good and Idol were pronounced well and fit by their trainers the morning after their high-profile victories Saturday at Santa Anita. Not that all the questions about them have been answered.

In the case of Life Is Good, his 107 Beyer Speed Figure was as attention getting as his eight-length victory in the San Felipe Stakes (G2). He is now the consensus favorite to win the Kentucky Derby, although concerns remain about his wide drift across the track in the homestretch.

[RELATED – What we learned: Life is Good looks invincible after San Felipe romp]

“The time was impressive, 1:42(.18) on that kind of track,” trainer Bob Baffert told HRN on Sunday morning. “He’s a little quirky, but that’s why we run these races. I’ve just got to get him to the next one, and I’m not really concerned with it right now.”

The next one for Life Is Good will be the Santa Anita Derby (G1) on April 3, his last start before the May 1 Kentucky Derby. Whether his stablemate and San Felipe runner-up Medina Spirit will join him has yet to be determined.

“He might stay here. He might ship,” Baffert said, referring to the Santa Anita Derby and the Arkansas Derby (G1, April 10). “With him I really don’t decide until the last minute.”

A next race also has not been determined for Santa Anita Handicap (G1) winner Idol. Richard Baltas sounded Sunday like he would prefer another 10-furlong test.

After a performance that earned a 102 Beyer, Baltas did not rule out training the 4-year-old Curlin colt up to the Hollywood Gold Cup (G1) on May 31 at Santa Anita. If Idol were to win that and the Pacific Classic (G1) on Aug. 21, he would earn a $1 million bonus for owner Calvin Nguyen.

“He’s already had three races since December, so maybe we’ll wait,” Baltas said. “Or maybe we ship him out of town. He’s run good at Churchill. He’s got that mindset where I think he’s the type of horse you could ship him. Maybe Oaklawn. I’m just happy the horse came back good.”

In any case, Baltas hopes Saturday’s winning rider Joel Rosario would be available again, especially after the perfectly timed stretch run that allowed Idol to catch Express Train two jumps before the wire.

After finishing third, beaten favorite Maxfield got a 99 Beyer, tied for the best of his career. Trainer Brendan Walsh said in a text message that the previously undefeated colt “came out good” and that he did not yet have a next race in mind.

Baffert’s Derby hopes do not end with Life Is Good and Medina Spirit. He has last month’s San Vicente Stakes (G2) winner Concert Tour coming back next Saturday in the Rebel Stakes (G2) at Oaklawn Park.

“And I might take Hozier,” Baffert said. “He broke his maiden here (Feb. 15). There was an allowance race that wouldn’t fill here, so I’m going to take him up there and maybe give him a spin around there.”

The enigmatic $1 million colt and Southwest Stakes (G3) runner-up Spielberg is also on the Derby radar. Baffert said he might be shipped to a 100-point prep next month at Oaklawn or Aqueduct.

“I could either run him back in the Arkansas Derby (G1) or maybe take him to the Wood (Memorial, G2) or try something like that.”

And speaking of Baffert’s 3-year-olds, he was not saying much yet about Bobby Bo, the unraced $1.1 million Speightster colt that has turned in five-furlong workouts of 59.0 seconds, 1:00.8 and 59.4 seconds the past three weeks.

Everything circles back to Life Is Good, especially since he was shortened to 4-1 in fixed odds at both Circa Sports and William Hill Nevada and had been bet down to 3-1 going into Sunday’s final hours in Churchill Downs’ latest pari-mutuel Kentucky Derby Future Wager.