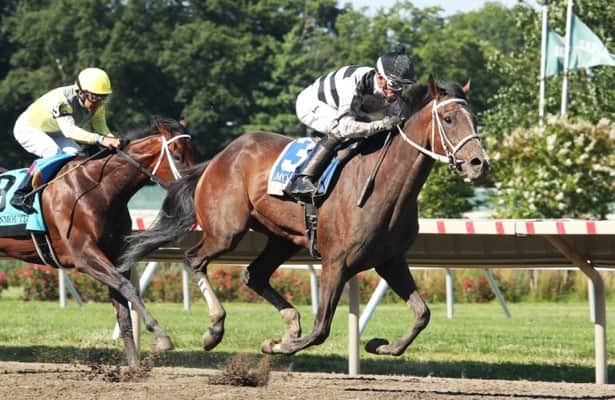 John Servis, trainer of Saturday's surprise Monmouth Oaks (G3) winner Leader of the Band, said her next start likely will be in the $150,000 Cathryn Sophia at Parx.

"She looks like she came out of the race really good," Servis told Horse Racing Nation Monday. "I talked with (owner William) Schwartz for a little bit after the race and probably the way we're going to go is the Cathryn Sophia, which is right at home, where she can walk out of her stall and go right to the paddock."

In the Monmouth Oaks, Leader of the Band defeated another Servis filly, Midnight Obsession, who was the fourth choice and came in third. The second-place finisher was favorite Eeny Meeny Miny Mo.

Midnight Obsession and Leader of the Band finished second and third, respectively, to Crazy Beautiful in the Delaware Oaks (G3) on July 3.

Leader of the Band, a daughter of Band Box out of the Sir Cat mare Catsuit, has a record of 2-2-1 from five starts this year and career record of 7: 3-2-2.

"She's improved with every race, which is very intriguing," Servis said. "She's a little on the high-strung side, but she's starting to get out of that. She's starting to mature and settle a little bit, as far as going to the paddock and in the paddock. As far as the races, she handles great. Running wise, she's always been good that way. But she just needs to learn to learn the game a little more and learn how to relax. And we've kind of been high on her from day one. She showed she had some talent, so it's nice to see her have that much talent."

Could bigger things be in store for her now that she has a graded-stakes win?

"Listen, she's modestly bred, to say the least. Band Box, I think it was his first graded stakes winner. I mean, we're not going to throw her to the wolves, I can tell you that. We're going to pick our spots with her and try to keep that record looking as good as ever."

Servis, whose most successful starter was Smarty Jones, winner of the 2004 Kentucky Derby and Preakness, said Leader of the Band and Midnight Obsession are the two "powerhouses" in his barn, although the latter "just hasn't gone on and improved like I thought she would."

That might be an indication of something else going on, he said. "She's made a little noise in her last couple starts. She hasn't really shown anything. But I think maybe next time I breeze her I'll put a dynamic scope in her and see what's going on there."