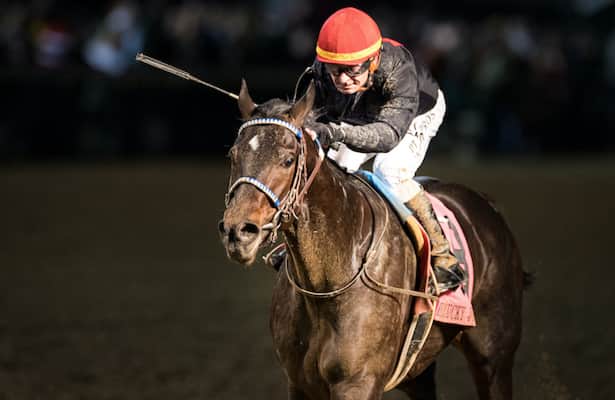 McPeek said in a news release Thursday that the next start for Tiz the Bomb probably will be in either the Florida Derby (G1) or the Arkansas Derby (G1), both on April 2 and both offering 100-40-20-10 to the top four finishers. Tiz the Bomb earned 10 Derby qualifying points with his win in the John Battaglia Memorial Saturday at Turfway, putting him at No. 16 on the Derby leaderboard.

Smile Happy, No. 6 on the leaderboard, will make his next start in the April 9 Blue Grass (G1), a 100-point event at Keeneland. He earned 10 points with his win in the Kentucky Jockey Club (G2) in November and 20 points for his runner-up effort in the Risen Star (G2) on Feb. 19.

Rattle N Roll is pointed to the March 26 Louisiana Derby (G2) after his sixth-place finish in Saturday's Fountain of Youth (G2). He is at No. 17 on the Kentucky Derby leaderboard with 10 points for his win in the Breeders' Futurity (G1) last October; the Louisiana Derby offers 100 points to the winner.

And Dash Attack is expected to make his next start in the Lexington (G3) on April 16. He earned 10 points for his win in the Smarty Jones and is at No. 21 on the leaderboard. McPeek apparently is taking him off the Derby trail as the Lexington offers only 20-8-4-2 points to the top four finishers. Dash Attack finished fifth in the Southwest (G3) and seventh in the Rebel (G2) in his last two starts.