What's next for Aloha West after upset Breeders' Cup win? 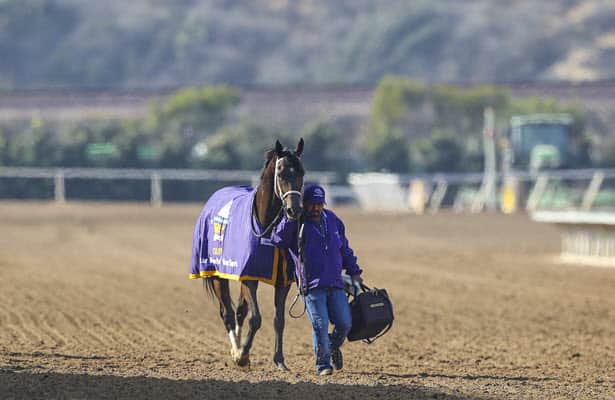 Wayne Catalano was unsure if Aloha West had gotten there.

In the minutes immediately following Saturday’s Breeders’ Cup Sprint at Del Mar, officials were checking the finish photo and the trainer was watching replays.

“When they hit the wire I wasn’t sure,” Catalano said. “That was the spot where I was more nervous and worried about anything is when they hit the wire, if he got up or not. First, live, I don’t think he got there. Second (replay), I don’t know, third I thought, ‘well maybe I’ve got a shot.’”

In the end, the photo was clear. The 4-year-old Hard Spun colt had hit the wire in first place at 11-1, giving Catalano the fourth Breeders’ Cup victory of his career.

The trainer told Horse Racing Nation Thursday that he was thrilled by the colt’s effort, going wide on the turn before moving like a turbocharged rocket ship down the stretch to beat out Dr. Schivel at the wire.

“I was so happy he was putting in the run,” Catalano said. “Every race you’ve got to put the run in, he’s got to show up. They only get better and tougher, good horses running against other good horses.”

Catalano said the Breeders’ Cup Sprint was Aloha West’s final race of the year. He and the colt’s owners, Eclipse Thoroughbred Partners, will map out a plan to begin 2022.

“We’ll go over it, map something out,” Catalano said. “The Saudi race ($1.5 million Riyadh Dirt Sprint) is February.”

Catalano knew Aloha West could be special early on in his career, after an assistant trainer spoke highly of one of his first breezes.

“She really liked him and I thought ‘wow,’ obviously it’s real early,” Catalano said. “But then he got going, and two races at Saratoga was a telltale sign that he was a good horse.”

Following the two Saratoga wins, rallied to be second by a neck to Special Reserve in the Phoenix (G2) at Keeneland.

The 4-year-old Hard Spun colt, described by Catalano as “just a happy boy,” was back in Kentucky this week and in excellent order according to his trainer.

Immediately after the win, Catalano described the race as “the pinnacle of my career,” and spoke of the lack of horses in his barn in a television interview. The trainer said since then, he has been receiving more interest.

Catalano currently sits at 2,933 career victories. He will hope for some more out of Aloha West in 2022.

The colt seems game to help.

“He’s pretty happy,” Catalano said. “He’s not that hard to train, but he loves his job.”