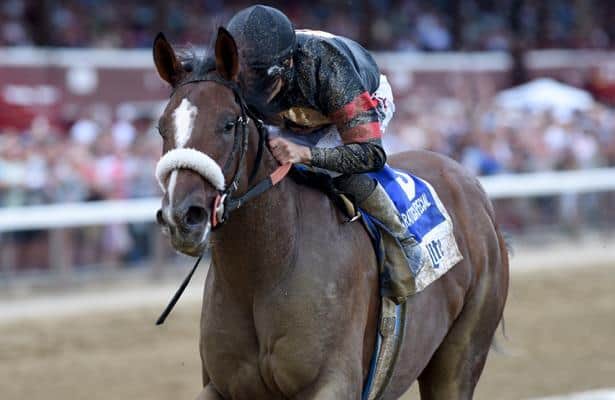 Three 2020 Kentucky Derby preps will draw most headlines going into this weekend, but stakes outside of racing’s glamour division will demand some attention, too. Here’s a look at who’s in across the country…

Run at seven furlongs on the Holy Bull (G3) undercard at Gulfstream Park, this race usually gathers an eclectic bunch of 3-year-olds, with this season no exception.

Graded stakes winner Green Light Go could be the favorite but hasn’t raced since suffering his first defeat last fall in Belmont Park’s Champagne Stakes (G1). He caries some Derby dreams, looking to go longer after this start along with Untitled, a recent private purchase transferred to the Mark Casse barn, and Necker Island, a Stanley Hough/Sagamore Farm allowance winner.

And then there are those who could be more in to win Saturday. Jacks or Better Farm, which always seems to be represented in the Swale, has two candidates trained by Ralph Nicks led by the multiple stakes winner Shivaree, who won the local Buffalo Man and Limehouse at six furlongs.

This would have been the spot for Pegasus World Cup (G1) hero Mucho Gusto had he not impressed trainer Bob Baffert so much in recent morning works. Instead, Baffert will send Grade 1 winner Roadster out in a hopeful return to form.

Roadster, second most recently to Omaha Beach in the Malibu Stakes (G1), was also second off the layoff in the Damascus on Breeders’ Cup weekend. Both of those events were around one turn. Going a route of ground between those races in the Native Diver (G3) at Del Mar, he languished, finishing last.

The San Pasqual will stretch Roadster back out to 1 1/8 miles against the likes of improving older horse Midcourse, Instagrand and Combatant. The latter, purchased for $220,000 in November, is new to the John Sadler barn for top client Hronis Racing.

Second in the Breeders’ Cup Turf and Hollywood Turf (G2), 5-year-old gelding United will look for a breakthrough in this 1 1/4-mile test on the turf. For LNJ Foxwoods and trainer Richard Mandella, he stepped up to stakes company last May and hasn’t missed the board at that level. But United’s also looking for his first stakes victory.

Other in-form turf runners such as the Hollywood Turf Cup winner, Oscar Dominguez, and recent San Gabriel (G2) runner-up Cleopatra’s Strike, look like top challengers. But what to make of Campaign?

The 5-year-old from the Sadler barn won a pair of graded races last season but was eased most recently in the Marathon (G2) on Breeders’ Cup weekend. Connections are hoping that was an aberration, and that this spot could land them an invitation to run on the upcoming Saudi Cup undercard.

On the Oaks trail…

Two preps, both of which award points on a 10-4-2-1 scale to their Top 4 finishers, run Saturday.

Oaklawn Park’s Martha Washington will be led by Taraz, the Juddmonte Farms homebred who has won both her starts by open lengths. Trainer Brad Cox is said to be considering a Derby trail start if she airs out again here. Expected rivals include Jose Sharp-trained O Seraphina and Seahawk Lisa for Hall of Fame trainer Jerry Hollendorfer.

Gulfstream’s Forward Gal (G3) also has a big-name headliner in Tonalist’s Shape, who is expected to seek her fourth consecutive victory and second straight stakes score following a nine-length romp in the local Hut Hut on Nov. 30. Hot trainer Saffie Joseph Jr. conditions the daughter of Tonalist, who has a seven-furlong assignment Saturday.