What to watch for: Quip makes comeback at Gulfstream Park 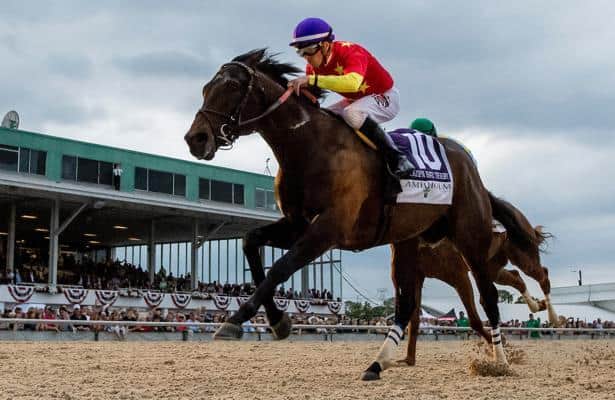 A lighter load of stakes races are lined up for this weekend following a packed Presidents Day. Two graded stakes are scheduled for Saturday, followed by a 3-year-old race on Sunday that could produce Derby trail contenders.

Here’s what we’ll be watching for:

Quip has been training at Payson Park with trainer Rodolphe Brisset. The WinStar Farms homebred by Distorted Humor is co-owned by China Horse Club and SF Racing. Nearly a year ago Quip made a winning 3-year-old debut in the Tampa Bay Derby (G2) and ran second in the Arkansas Derby (G1). Connections decided to skip the Kentucky Derby and wait for Preakness, in which Quip finished eighth in the fog and rain.

Breaking Lucky ran away with a December optional claiming race at Gulfstream by 8 ¼ lengths before finishing second in the Fred W. Hooper. Fellowship (third) and Copper Town (seventh) have returned to the work tab since the Fred W. Hooper, run over a sloppy track on the Pegasus World Cup undercard. Storm Advisory (fifth) has not registered a work since the Jan. 26 race.

Owned by trainer Jerry Hollendorfer, All Schlaich Stables LLC, Gatto Racing LLC and G. Todaro, the 5-year-old mare was claimed for $40,000 a year ago. Her career earnings now reach $818,595. She won three graded stakes in a row – the John C. Mabee (G2), the Rodeo Drive (G1) and the Goldikova (G2) – before finishing fourth in the Matriarch (G1).

Top challengers in the field of 10 include Amandine, Elysea's World, Fahan Mura and Ms Bad Behavior.

Amandine, bred in Great Britain, made her first U.S. start in November, scoring in allowance optional claiming before winning the Lady of Shamrock Stakes. She finished third in the American Oaks (G1) and fourth in the Megahertz against older fillies and mares.

Elysea's World has been transferred to trainer Richard Baltas in Southern California from Chad Brown's East Coast base. She's a multiple Grade 3 winner after breaking through last season and looks to rebound from an eighth-place run in Woodbine's E. P. Taylor (G1).

Stakes-winning Ms Bad Behavior has placed in graded company multiple times and has ran second in her last four starts, including to Vasilika in the Megagertz and Amandine in the Lady of Shamrock.

Winchell goes for Mine That Bird Derby repeat

Winchell Thoroughbreds LLC’s Wicked Indeed is entered for Sunday’s $100,000 Mine That Bird Derby. The Steve Asmussen trainee last ran fourth in Fair Grounds’ Lecomte (G3) and has continued training in New Orleans since. The Mine That Bird Derby serves as the local prep for the Sunland Derby (G3) in New Mexico.

Winchell won the Mine That Bird Derby a year ago with Reride, who used that race as a springboard to run third in the UAE Derby (G2) overseas.

Wicked Indeed is a Winchell homebred by Tapit and out of the stakes winning mare Wicked Deed. He won on debut Nov. 30 at Fair Grounds, and connections already thought big things were in store.

“He’s a big pretty colt like all the other foals out of the mare,” Winchell’s racing manager David Fiske told Fair Grounds’ publicity after the maiden special weight. “He’s a full-brother to two graded stakes winning fillies so we have fairly high expectation for him. Everything that she produced of racing age is a winner.”

The two fillies referenced are My Miss Lilly, who won the Gazelle (G2) last spring on the Kentucky Oaks trail and Just Wicked, winner of the 2015 Adirondack (G2).

Wicked Indeed finished third behind Tackett and Owendale, who also competed on Fair Grounds’ Kentucky Derby trail, in a Dec. 22 allowance optional claiming race. The Lecomte was his first stakes race and he drew the rail in a 12-horse field.

The Mine That Bird Derby should be an easier spot class-wise than moving straight to another points-paying prep at Fair Grounds or Oaklawn Park, where Asmussen runs many of his Derby hopefuls in the winter.