What to watch for: Former Dubai World Cup favorite returns 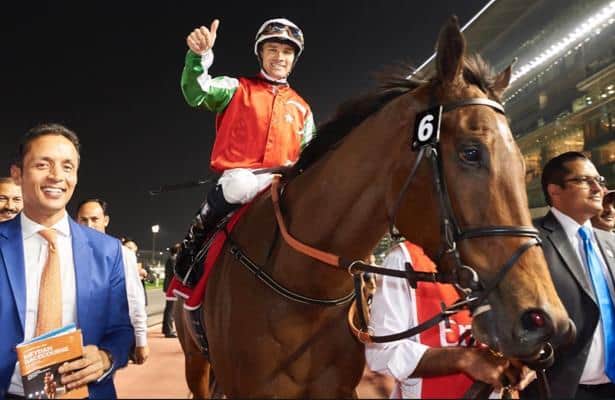 On what’s shaping up to be a rather slow week stateside for stakes action, the Dubai World Cup Carnival will continue its strong start. Here’s what to watch for…

Away from the races since finishing seventh in the 2019 Dubai World Cup (G1), North America will begin his run up to this year’s edition of the $12 million race in Thursday’s feature at Meydan Racecourse.

Round 1 of the Al Maktoum Challenge runs at a mile, mixing the speedy North America in this field of eight with horses such as Heavy Metal and Kimbear that figure to go shorter on the big night, March 28, in the Godolphin Mile (G2).

North America went into the last World Cup as the favorite off victories in Rounds 1 and 2 of the challenge. He had broken poorly in the 2018 running but didn’t have that as an excuse, leading the first time by. But North America faded in the stretch after absorbing pressure to his outside the entire way.

Now 8, the gelding trained by Satish Seemar will have to prove he hasn’t lost a step agains the likes of multiple group winner Muntazah, a Meydan track record holder at the distance.

"It’s hard to say what will happen," Seemer said with North America breaking from the outside. "You can look at it two ways. Either he breaks and jumps out well, takes his spot and wins — or it doesn’t work out. (Muntazah) has the (better) draw and a straight-away advantage, so he is the one to beat, but there’s always a scenario that will change as the race happens.”

The biggest domestic event of the week runs Saturday at Santa Anita Park, where Spiced Perfection is expected to lead a group of older fillies and mares on the stretch out to 1 1/16 miles.

The 5-year-old daughter of Smiling Tiger is at an interesting crossroads here. With Breeders’ Cup Filly & Mare Sprint winner Covfefe along with the multiple Grade 1 winner Come Dancing both back for 2020, perhaps she could emerge from this spot a candidate to go longer in the championships.

The Breeders’ Cup runs at Spiced Perfection’s favorite track, Keeneland, where last year she won both the Madison (G1) and Thoroughbred Club of America (G2). After a fourth in the 2019 Filly & Mare Sprint, Spiced Perfection didn’t meet her reserve at auction and returned to trainer Peter Miller, winning Aqueduct’s Dec. 7 Go for Wand (G3) as the favorite.

In addition to the La Canada, Santa Anita’s Saturday card includes the Las Cienegas (G3), a 5 1/2-furlong turf sprint also for fillies and mares 4 and up. Both races draw Wednesday.

A Thread of Blue, named to the list of reserves for the Pegasus World Cup Turf (G1) later this month, could instead headline Saturday’s Gulfstream Park feature for older horses going a mile on the lawn.

The Saratoga Derby winner last season as a 3-year-old, A Thread of Blue went on to finish fourth in the Jockey Club Derby and second in the Hill Prince (G2), both at Belmont Park. It’s at Gulfstream, however, where the Kiaran McLaughlin trainee is 3-for-3 with his lone graded score.

The son of Hard Spun leads a prospective field including stakes winners such as Gidu, Exulting and Maraud.

Along with the Tropical Turf, Gulfstream has on its Saturday program the Marshua’s River (G3) for older fillies and mares going 1 1/16 miles on grass. These races also draw Wednesday.