What to watch for: Champion sprinter Roy H getting started 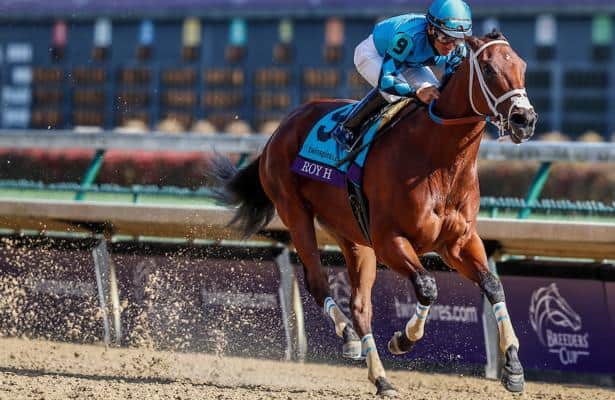 While Fair Grounds leads the stakes action this weekend with Kentucky Derby and Oaks preps, there's other stakes action to anticipate. Both Santa Anita Park and Gulfstream Park could feature 2018 Breeders’ Cup runners, while 3-year-olds of note will go at Tampa Bay Downs.

Here’s what we’ll be watching for this weekend:

Two-time Breeders’ Cup Sprint champion Roy H is expected to return Saturday in Santa Anita’s Grade 2, $200,000, Palos Verdes Stakes, a race he won a year ago. Now embarking on his 7-year-old campaign, Roy H is the reigning Male Sprint Eclipse Champion and is among the finalist to defend that title with the winner announced Jan. 24.

The More Than Ready gelding, trained by Peter Miller for Rockingham Ranch and David A. Bernsen, LLC, saw his career take off in 2017. He ended that season by winning the Santa Anita Sprint Championship (G1) and Breeders’ Cup Sprint, then replicated those victories to end 2018.

The Palos Verdes should again be a steppingstone to the Dubai Golden Shaheen (G1), a race Roy H was third in last year.

Other Palos Verdes probables include Kanthaka and Awesome Anywhere from the Jerry Hollendorfer stable and St. Joe Bay, who's trained by John Sadler.

Kanthaka won the San Vicente (G2) last year ahead of racing in two Kentucky Derby preps, including a third in the San Felipe (G2). While he didn’t make it to Churchill Downs, he won the Lazaro Barrera (G3) back at Santa Anita that same month. He returned in the Malibu (G1) after a seven-month layoff and finished eighth.

The Palos Verdes would be the second stakes appearance for Awesome Anywhere, who last ran third in Golden Gate’s Oakland Stakes, only beaten half a length. Prior to that, the former claimer won back-to-back allowance optional claiming races sprinting at Santa Anita.

St. Joe Bay, also a 7-year-old gelding, won the Palos Verdes two years ago. He was winless since then until a month ago when he beat 2017 Breeders’ Cup Turf Sprint runner-up Richard’s Boy by a head in an allowance at Los Alamitos. He hit the board in two starts before his winner’s circle return, finishing third to Battle of Midway in the Comma to the Top Stakes and second by a neck in another Los Alamitos allowance.

Tampa Bay Downs listed Grade 2 winner Call Paul as a likely starter in Saturday’s $125,000 Pasco Stakes, a seven-furlong sprint for 3-year-olds. Call Paul found the winner’s circle last out in the Pennsylvania Nursery at Parx in state-bred company, as the field was no match for the Jason Servis trainee, who pulled away by five lengths.

Call Paul won on debut at Delaware Park, beating eventual Grade 1 winner Mind Control before taking the Saratoga Special (G2) over Tight Ten. He finished third in both the Champagne (G1) and the Nashua (G1) in New York when stretched out to a mile.

Those likely to take on Call Paul include Gladiator King and Cave Run. Gladiator King won Tampa’s Inaugural Stakes over a sloppy track Dec. 15, the same day Cave Run broke his maiden over the track. Both races were six furlongs, and Cave Run crossed the wire in 1:13.30, which was .19 seconds faster than Gladiator King. Gulfstream Park West Juvenile Sprint Stakes winner and Buffalo Man Stakes runner-up Jackson is also listed as a likely entrant, as is War Bridle, with two wins in maiden and starter optional claiming company.

While the Pasco is not a Derby prep, it could lead up to the Sam F. Davis (G3) on Feb. 9 and the Tampa Bay Derby (G2) on March 9 with a contender that wants to stretch out. Servis won the Pasco with World of Trouble last year and the colt came back to finish third in the Tampa Bay Derby.

World of Trouble became a top horse in the turf sprint division and finished a neck behind Stormy Liberal in the Breeders’ Cup Turf Sprint. It was another 7 ¼ lengths back to third. He returned to Tampa Bay to win the FTBOA Marion County Florida Sire Stakes by 13 ¾ lengths a month ago.

The 4-year-old colt is nominated to three of the Sunshine Millions races at Gulfstream Park this weekend – the Classic at 1 1/8 miles, the Turf at 1 1/16 miles and the Sprint at six furlongs.

Fair Grounds has a loaded card of stakes lined up Saturday, topped by the Grade 3, $200,000 Lecomte Stakes for 3-year-olds at one mile and 70 yards. The winner receives 10 points on the Road to the Kentucky Derby. Kentucky Oaks points are also on the line in the $150,000 Silverbulletday Stakes, for 3-year-old fillies at the same distance.

You can already run down the Lecomte morning line odds and analysis for the overflow field, while Churchill Downs' Golden Rod (G2) winner Liora leads the Silverbulletday entries, with trainer Wayne Catalano deciding to enter at the last minute.