What does the Canadian racing world think of new U.S. rules? 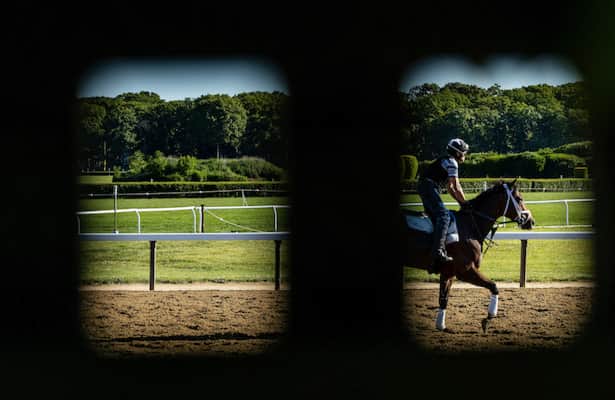 Racing in Canada will not be directly affected when the Horseracing Integrity and Safety Act is implemented on Friday. But there is plenty of interest – and optimism – north of the border concerning the U.S. legislation.

Mark Casse, a Hall of Fame trainer in Canada and the U.S., doesn’t expect an immediate impact but admits he isn’t quite sure.

“I'm still just learning the nuts and bolts about it all,” Casse told Horse Racing Nation this week. “I still have lots of questions. And I've actually reached out to some officials, because anything that I have in the U.S. obviously has to be registered with HISA. But when the horse is in Canada, I'm so not sure. Obviously, we're still in the very early stages of all this. And I think there's still a lot of kinks to work out. The only thing I know, and what I've been told, and that is, Canada is a different country. And right now, they compete under their own rules. So in Canada, our horses are treated as Canadian horses.”

Sue Leslie, president of the Horsemen’s Benevolent and Protective Association of Ontario, said, “we're watching with keen eyes what's going on in the United States.” Her organization represents Thoroughbred owners and trainers.

“There's a lot of things that are not yet resolved, so we're just on the sidelines watching right now, I think all of us,” she said. “Hopefully, if there's some good things in there that we don't have covered at our end that we need to implement, I'm sure that we would. And I'm sure there also will be some things in there that we fundamentally disagree with, and we will be arguing against if, in fact, our regulators decide that they wanted to try and implement.”

The question of enforcement

In Canadian racing, Casse said, “they don’t mess around” when it comes to rule enforcement. He cited the recent case of trainer Robert Gerl, who was fined CDN$100,000, or US$78,919 last month and suspended for 20 years after two horses under his care tested positive for ostarine after races at Woodbine.

“I may be wrong, because I haven't looked lately, but I think Woodbine in Toronto has one of the best safety records of any racetrack in North America as well," Casse said. "And they definitely play in a different way. My concern with it all, and I'm going to put this out there, and I may upset some people or whatever, is the more rules you make – rules are great as long as you can enforce them. And if you can't enforce them, the only thing that rules do is strengthen the bad guys.”

That’s because bad guys “don't play by the rules. So that is my biggest concern. We've got all these rules. They're great. But we have to be able to enforce rules.”

Casse is confident in the ability of the Horseracing Integrity and Safety Authority to enforce the rules.

“There's always going to be some pain for gain. And so it's going to be a little painful," he said. "I understand where they're going. If everybody has to report everything that's being done, it's easier to catch the ones that aren't reporting and aren't doing it. And I think what happens is veterinarians are put in a position where they either – some people, some trainers, owners, may ask them to do things that they don't necessarily believe, but they ended up doing it. Because they need a job. They have kids and families to feed. I think this is going to scare the hell out of them. Which is good.”

Leslie said she is hopeful that HISA “deals harshly with people who want to participate outside of reasonable boundaries.”

‘The other way is not working’

In general, Leslie said, she supports the idea of one authority overseeing all of racing in the U.S.

“I do only because the other way is not working,” she said. “And as an industry, we haven't been able to rise to fix that within the industry. It's very difficult to ask people participating to have to follow different rules and regulations and drug levels and all that type of thing every time they race a horse in a different state. You have to have consistency, but the consistency has to be fair and reasonable and it has to be cost-effective. And we don't have the answers to those things yet. So I'm not extremely pro-HISA, and I certainly am not extremely against HISA. I'm hoping that the leadership of HISA will use common sense, fairness and create an atmosphere that encourages participation in the industry.”

Going back to the idea of “pain for gain,” Casse sees pluses and minuses with HISA, but he’s pulling for it to work.

“I was just on the phone, hiring a person that all she's going to do is probably take care of all the medication reporting. From a trainer's standpoint, especially with a trainer that has a sizable amount of horses, it's going to be an expense. But again, with all assets, there's liabilities, and I'm hoping for our industry that we're going to see a lot of assets from this.”

Leslie also wants it to succeed. “I'm hoping that the approach is going to be to help horse racing, not to overburden it and make it such an unpleasant thing to do that no one wants to train horses and no one wants to own horses,” Leslie said. “That would be a terrible outcome. And hopefully those in charge are weighing those as they implement the change.”

In a statement to Horse Racing Nation, the AGCO acknowledged that HISA “is an effort by our U.S. colleagues to work towards and improve the fairness and integrity of horse racing – this is a goal of all regulators in the sport.”

The agency noted that many of the measures in HISA already are in place in Ontario, including a ban on race-day medication, clear rules on the use of the crop and a concussion protocol for injured riders.

“While HISA’s authority may be only applicable in the United States, we acknowledge that given proximity and the migratory nature of racing participants, there may be considerations for Ontario," the agency said. "We will continue to monitor the rollout of the act and consult with our stakeholders.”

Asked for comment about the upcoming changes in the U.S., Woodbine also responded with a statement. “We are proud of our safety record at Woodbine and commend any efforts to make our sport safer. As such, we support HISA’s objectives and efforts to make the sport of horse racing safer and we will continue to monitor the impact of HISA with our stakeholders and regulators.”