Weyburn (46-1) lights up the tote board in Gotham 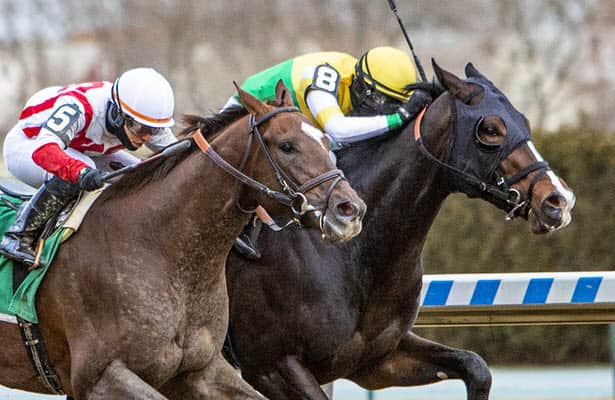 Ontario-bred Weyburn went from maiden winner to a potential spot in the Kentucky Derby starting gate on Saturday with a thrilling victory at odds of 46-1 in the Grade 3, $300,000 Gotham Stakes (G3) at Aqueduct on Saturday.

Weyburn, who prevailed by a nose over 5-1 third-choice Crowded Trade, collected 50 qualifying points towards the Derby with the win for trainer James Jerkens, which history shows will likely be enough to make the starting gate at Churchill Downs if the connections so choose. He is not currently nominated to the Triple Crown.

Rob Landry, general manager for owner-breeder Chiefswood Stable Limited, said it remains to be determined if Weyburn will be pointed to the Kentucky Derby.

“We don’t want to get too excited. We haven’t nominated him to the Triple Crown because we were a little bit behind, but that doesn’t stop us from supplementing him," Landry told the NYRA press office. "If he earns his way there, he’ll get to run there. There’s still a long way to go.”

Entering off a three-month layoff, Weyburn and jockey Trevor McCarthy broke alertly and pressed California-shipper Freedom Fighter through fractions of 24.29, 48.03 and 1:12.85 for six furlongs. He poked a head in front of that rival at the top of the stretch, but then was quickly joined by a rallying Crowded Trade to his outside. Weyburn was momentarily overtaken as they dueled to the wire, but then gamely battled back along the inside to win by the narrowest of margins.

“He got into a really good groove down the backside and the pace wasn’t too hot," McCarthy said. "He’s a big, solid horse and I just wanted to get him rolling early. I did like Bob’s horse [Baffert, No. 7, Freedom Fighter] today, so I wanted to put pressure on him, too.

“He switched leads in that last eighth and that made him resurge," McCarthy added. "He was really aggressive and he had a lot of fight in him.”

Crowded Trade -- who was exiting a debut win going six furlongs at Aqueduct on Jan. 28 for Klaravich Stables and trainer Chad Brown --  earned 20 Derby points for the runner-up finish. Highly Motivated -- the odds-on favorite and stablemate of Crowded Trade-- was a no-threat third after encountering early trouble down along the rail. Completing the superfecta and earning five Derby points was Freedom Fighter for trainer Bob Baffert.

A homebred for Chiefswood Stables Limited, Weyburn provided a first-ever Gotham win for both McCarthy and Jerkens. Jerkens' father, Hall of Famer Allen Jerkens, won the Gotham with Devil His Due in 1992.

“Jimmy has done a tremendous job with this horse," Landry said. "We’ve had high hopes for Weyburn all along. We thought he was the real deal, but until they meet those kind of horses you just never know. He ran a fantastic race."

Added Jerkens: “We thought he would like the distance, ultimately. His last two works were sensational. He went three-quarters in 1:13 and galloped out in 26 and change.

"I didn’t mean for him to go that fast. But you don’t worry about that when they’re fresh and strong," Jerkens continued. "He was going to have to do something like that to win a race like this. We had to ask him for something in the morning and replicate it in the afternoon.”

Click here for Aqueduct entries and results
Weyburn finished off the board when debuting at Belmont Park in October, the came back the following month to be second going seven-furlongs against maidens when adding blinkers at Aqueduct. He graduated in start No. 3 on Dec. 5 at Aqueduct going seven furlongs on a sloppy track track.

By Pioneerof the Nile out of the unraced A.P. Indy mare Sunday Affair, Weyburn was entered in the Jan. 31 Jimmy Winkfield at Aqueduct, but was scratched due to a foot abscess.

New York's final stop on the road to the Kentucky Derby is the $750,000 Wood Memorial (G2) on April 3. Landry said it's possible Weyburn could make that race, which is contested at 1 1/8 miles and provides a total of 170 Derby points with 100 going to the winner..

“We’ll talk to Jimmy and see how the horse comes back. We’re definitely not going to rule it out, but we want to do what’s right by the horse," Landry said. "We’ll let the horse tell us that with how he comes out of the race and how he’s training. Jimmy knows his horses and we’re going to count on him.”

Jerkens, who noted Weyburn's "still a little kid," is also taking a wait-and-see approach to the Wood.

“I don’t know. We’ll just take this all in," Jerkens said. "Of course, it’s a logical spot. It’s right here. He’s kind of a quirky horse. The pony man takes him every morning because he’s tough and wants to wheel. He’s still a little kid. He doesn’t trust everybody.

"This is just really satisfying because it’s been a tough winter and we loved him from day one," Jerkens added. "He didn’t run first out and we didn’t know what to think. Thank God we stuck to our guns. I think he’ll end up being a decent colt.”