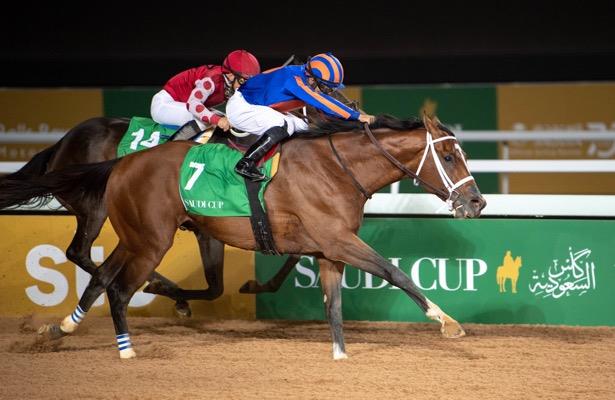 The Jockey Club of Saudi Arabia announced on Monday that purse money for the inaugural $20 million Saudi Cup on Feb. 29, which has been withheld pending an internal investigation into winner Maximum Security, would be paid out to the second- through 10th-place finishers.

As for Maximum Security--whose trainer at the time Jason Servis has been federally indicted on horse doping charges--the prize money will continue to be withheld "until the JCSA is able to satisfactorily complete its investigation and any inquiry."

Maximum Security's co-owners Gary West and Coolmore offered a response to the decision in a statement released on Wednesday.

On February 29, 2020, Maximum Security, owned by Gary and Mary West and the Coolmore partners, was the impressive winner of the inaugural running of the $20 million Saudi Cup in Riyadh, Saudi Arabia, the world’s richest race. Now, five and one half months later, the winner still hasn’t been declared official and no information has been made public regarding this matter. In the annals of international racing, this is unprecedented.

It is standard operating procedure in the Americas, Europe, South Africa, Australia, New Zealand, Japan, Hong Kong, and Dubai to test horses for the presence of prohibited or illegal substances and to disqualify horses if the presence of such substances is found in post-race laboratory results. This internationally accepted level of transparency is both fair and vital to the integrity of the sport. However, it’s just as important and fair to declare a race official in a timely manner and to release purses if horses test negative. Those are the rules by which all major racing centers operate, but this is apparently not how racing is conducted by the Saudi Arabia Jockey Club (SAJC), which developed the Saudi Cup as an entrée into the big leagues of international racing. Nothing like this has ever happened in the history of horse racing.

Following Maximum Security’s victory in the Saudi Cup, which reinforced his position as one of the best racehorses in the world, the colt’s then-trainer, Jason Servis, was indicted by the U.S. Attorney’s Office of the Southern District of New York (SDNY) in early March on one count of “misbranding conspiracy,” the details of which are in the public record. Subsequently, a decision was made by the representatives of the Saudi Cup to conduct an “investigation” into Maximum Security, even though the SDNY indictment of Servis was limited to his conduct between February and October of 2019.  After that time frame, Maximum Security won the Grade 1 Cigar Mile at Aqueduct on Dec. 7 before the Saudi Cup on February 29, 2020, and he has never once tested positive for an illegal or prohibited substance during his career.

We understood, once the Servis indictment was announced, that the original test results, which were extensive, including blood, urine, and DNA hair testing, needed to be re-examined post-race by the top drug-testing laboratories in the world. Thereafter, we received two requests from the Saudis for bank wiring instructions, leading us to believe that all test results had been negative (as we believe they were) and funds would be forthcoming. Instead of receiving the purse monies, we received a letter dated April 29 from a ‘Private Investigator’ who had been hired by the JCSA to conduct an ‘investigation’ of Maximum Security’s entitlement to the purse. If this race is decided by a ‘Private Investigator’, it will be the first time in the history of horse racing that a ‘Private Investigator’ will decide the outcome of a horse race. Winning horses are always decided on the racetrack and backed up by post-race testing. If a horse wins the race to the satisfaction of the stewards and passes post-race testing, it is universally accepted that the horse is the winner of the race, with the possible exception of the SAJC.

We have repeatedly asked through our counsel to have the Saudi Cup officials publicly announce whether Maximum Security’s test results revealed performance enhancing or illegal medications of any kind and they have refused to provide that information. We have also requested a split sample so that we may have tests performed, but that request has also been denied, which is something that would never happen in the U.S.

We can only assume if Maximum Security tested positive for any illegal or prohibited substance, the news would be out, the horse would have already been disqualified, and any ‘investigation’ would be irrelevant. We have cooperated and intend to continue to cooperate with the ‘investigation’, but we call on H.R.H. Prince Bandar and the representatives of the Saudi Cup to make this process transparent and swift to the international racing community.  Transparency serves the integrity of racing and the reputations of the Saudi Cup and Maximum Security, both of which have been badly tarnished by these unheard of delays and bizarre circumstances. The entire process has been unfair and the international racing community deserved to know the outcome months ago.

If the SAJC wants to compete on the big stage of international racing, they need to let everyone know what they are investigating and what their plan is. If there was a bad test, that was known long ago and the results should be made publically available immediately. If Maximum Security tested positive for any illegal substance he should be disqualified. Shrouding this investigation in a cloak of secrecy is not how to gain the respect of and faith in the international racing community.

SOMETHING TO THINK ABOUT

For the purpose of analyzing the fairness of this decision by the Jockey Club of Saudi Arabia let’s assume that any horse tested positive for cocaine, cobra venom, frog juice and 10 other PED’s in previous races. Prior positive test results would not disqualify that horse from running in the Saudi Cup or any other race. And, if the horse won and tested negative by testing labs chosen by the racing authorities, that horse would be officially declared the winner of the race. That is the way things work everywhere in the world with Saudi Arabia Jockey Club being the only known exception.