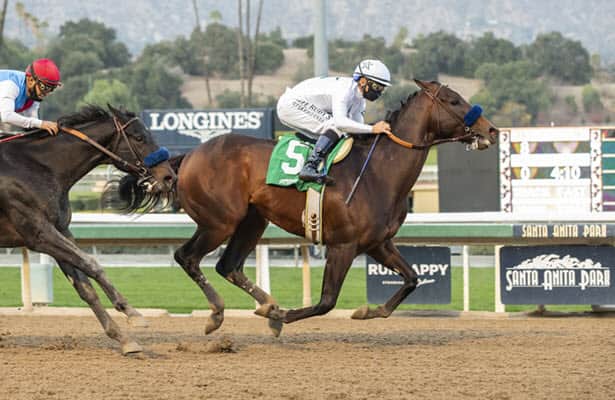 As much of the country is forced to deal with severe weather conditions, which has upended training routines and shook-up the Kentucky Derby prep schedule, the mild climate out west has allowed horsemen to continue their preparations for the spring classics largely without a hitch.

The potential extent of California's weather advantage could be revealed starting next month as some horse's begin to venture outside of the Golden State for their next prep assignments. Trainer Bob Baffert already has one colt pointed to the March 13 Rebel (G2) at Oaklawn Park, where local contenders have had training schedules interrupted due to snow and ice; and Doug O'Neill has one penciled in for the March 20 Louisiana Derby (G2) at Fair Grounds, which has been dealing with similar yet less-extreme conditions.

Baffert (3), O'Neill (2) and Art Sherman (1) have combined to win six of the past nine Kentucky Derby's with California-based horses.

Life is Good (8-1 - Into Mischief - Bob Baffert - CHC Inc., WinStar Farm - 10)
He closed pool 3 of the Kentucky Derby Future Wager this past weekend as the 7-1 favorite among 23 individual betting interests. The "field," which encompasses all other 3-year-old not listed, was the overall favorite at 3-1.

Life is Good was a debut winner at Del Mar in November and came back to win the Jan. 2 Sham (G3) going a flat mile at Santa Anita Park. He is slated to put his perfect record to the test in the March 6 San Felipe (G2) at Santa Anita. Contested at 1 1/16 miles, it awards Kentucky Derby qualifying points to the top four finishers on a 50-20-10-5 scale.

Medina Spirit (40-1 - Protonico - Bob Baffert - Zedan Racing Stable’s - 14)
After being beaten less than a length by Life is Good in the Sham, came back with a tough-as-nails victory in the Robert B. Lewis (G3) over the promising duo of Roman Centurian and Hot Rod Charlie.

In the Lewis, Medina Spirit broke on top, set swift fractions of 22.4 and 46.3 for a half mile, then gutted it out late under Abel Cedillo to prevail by a neck over Roman Centurian. Baffert has not yet indicated a next start for the $35,000 son of Protonico, who closed at 25-1 in the KDFW.

Concert Tour (10-1 - Street Sense - Bob Baffert - Gary and Mary West - 0)
Following a debut win sprinting at Santa Anita on Jan. 15, came back to score by a half-length over pacesetting stablemate Freedom Fighter (see below) in the seven-furlong San Vicente (G2) on Feb. 6 at Santa Anita. It was certainly an encouraging effort from homebred, who rated in third and reeled in the leader late. Next up for Concert Tour, who closed the KDFW at 17-1, is a trip out of town for the Rebel (G2) at Oaklawn Park, which awards 50 qualifying points towards the Kentucky Derby.

Roman Centurian (45-1 - Empire Maker - Simon Callaghan - Don Alberto Stable, Qatar Racing - 4)
Following an easy maiden win going two turns at Santa Anita on Jan. 3, he earned his first Kentucky Derby qualifying points with a narrow second-place finish behind Medina Spirit in the Robert B. Lewis. It was an encouraging effort from the $550,000 auction purchase, who Callaghan said will likely make his next start in the San Felipe.

Hot Rod Charlie (35-1 - Oxbow - Doug O’Neill - Roadrunner Racing, Boat Racing, Strauss Bros. Racing - 10)
After nearly springing a 94-1 upset in the Breeders' Cup Juvenile to close out his 2-year-old campaign, he resurfaced after a winter break in the Robert B. Lewis where he was beaten a neck by Medina Spirit. It was a promising start to the campaign for the $110,000 auction purchase. He stumbled out of the gate was left a few lengths when settling in fourth, but rallied gamely in the stretch between horses to be beaten just a neck and a nose. O'Neill said the Louisiana Derby (G2) at Fair Grounds on March 20 is the target for Hot Rod Charlie.

The Great One (45-1 - Nyquist - Doug O’Neill - ERJ Racing, Train Wreck Al Racing Stables, Niall Brenna, Tom Fritz, William Strauss - 4)
The Louisiana-bred has emerged as promising contender out west after being beaten just a nose by Spielberg in the Dec. 19 Los Alamitos Futurity (G2) while still a maiden, and coming back to graduate against non-winners by 14 lengths on Jan. 23 at Santa Anita. Both efforts earned a 100-plus Brisnet Speed Rating, making him the only horse on this list to so far achieve the feat. He is pointed to the San Felipe.

Debuting at Santa Anita going 6 1/2 furlongs on Feb. 7, he circled the field from the back of the pack and won going away to score by 4 3/4-lengths in a powerful display. The win was enough to earn him a spot in last weekend's KDFW, where he closed at 28-1. Eurton said a start around two turns would be next for Dream Shake, whether an allowance or the San Felipe.

Rombauer (100-1 - Twirling Candy - Michael McCarthy - John Fradkin, Diane Fradkin - 14)
After scratching from the Lewis, he was shipped north for last Saturday's El Camino Real Derby where he rallied from dead last to get up and win by neck in his sophomore bow. That came over a synthetic track, while his only other win was a maiden-breaking score on grass at Del Mar last summer. In two dirt starts, Rombauer was second behind Get Her Number in the American Pharoah (G1) and a solid fifth in the 14-horse Breeders' Cup Juvenile (G1). McCarthy said this week "all options" are on the table for Rombauer's next start.

Freedom Fighter (65-1 - Violence - Bob Baffert - SF Racing, Starlight Racing, Madaket Stables, Golconda Stables, Siena Farm, Robert Masterson - 0)
Off for six months following a debut win last summer at Del Mar, he returned in the San Vicente and set the pace before getting nailed by a half-length in the final strides by stablemate Concert Tour. The effort was enough to earn him a spot in last weekend's KDFW, where he closed at 52-1. Baffert said a trip to New York for the March 6 Gotham (G3) is the target.

Get Her Number (175-1 - Dialed In - Peter Miller - Gary Barber - 10)
Unraced since winning last year's American Pharoah (G1), he returned to the work tab on Jan. 22 at Santa Anita and has worked five times for his sophomore bow. Miller is targeting a race in early March, most likely the San Felipe.

Still a maiden after two starts, he was second-best to Concert Tour on debut and was no match for Dream Shake in that colt's maiden-breaking win. Callaghan said he is likely start in a two-turn maiden race scheduled for Santa Anita in early March. If all goes well, it will likely be one more crack at the Kentucky Derby a month later in the final round of preps.

Spielberg (200-1 - Union Rags - Bob Baffert - SF Racing, Starlight Racing, Madaket Stables, Golconda Stables, Siena Farm, Robert Masterson - 13)
After a busy 2-year-old campaign that included six starts and a win in the Los Alamitos Futurity, he added one more Derby qualifying point when checking in fourth in the Robert B. Lewis in is 3-year-old bow. To this point, Spielberg has failed to show the necessary progression to be considered a serious contender for the spring classics. Baffert has not indicated what might be next for the colt.

Parnelli (200-1 - Quality Road - John Shirreffs - CRK Stable - 2)
After a distant third in the Sham, he returned in the Lewis where he was up close for a half mile before fading to fifth in a field of six. The recent form is certainly lacking. However, this colt did display promise when graduating by 5 3/4 lengths at Del Mar in the fall, and in his corner is a Kentucky Derby-winning trainer known for steady development. He followed the Lewis effort with a sharp four-furlong drill in 47.2 at Santa Anita this past Saturday.