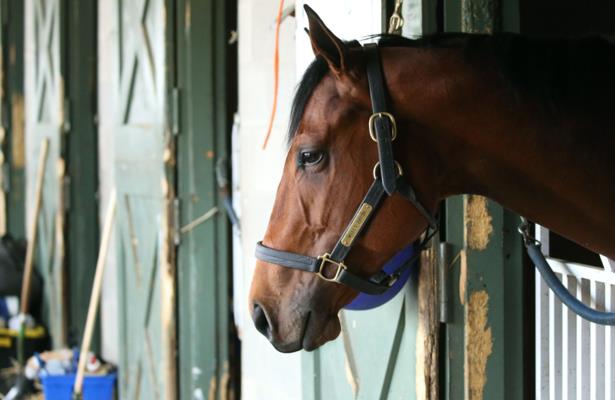 Other than “a little tired,” Wells Bayou was deemed in fine fettle by trainer Brad Cox after scoring a gate-to-wire victory in Fair Grounds' Grade 2, $1 million Louisiana Derby.

Worth 100 qualifying points toward the 2020 Kentucky Derby, Saturday's win propelled the son of Lookin at Lucky to the top of the leaderboard for the 1 ¼-mile classic at Churchill Downs, which has been rescheduled for Sept. 5 due to the coronavirus pandemic.

“I checked him [Sunday] morning before I hit the road and I was happy with the way he looked,” Cox said Sunday afternoon in a conversation on FS1's America's Day at the Races. “I did think he was a little tired, but he has the right to be. It was a big effort, asking him to run an eighth of a mile farther than he had ever went before.”

In the 1 3/16-mile Louisiana Derby, Wells Bayou shot to the front under Florent Geroux and was alone on the lead through fractions of :23.56, :48 flat, 1:12.42 and 1:37.61 for the mile. Put under a drive at the top of the stretch, Wells Bayou reached the eighth pole two lengths clear of Ny Traffic and kept that rival at bay while coasting under the wire a one-length winner. It was another 2 3/4-lengths back to Modernist in third.

Wells Bayou completed the trip, which is a sixteenth of a mile shorter than the Kentucky Derby and matches the Preakness Stakes' distance, in 1:56.47. He earned a 91 Beyer Speed Figure.

Cox said the Arkansas Derby (G1), which has been moved from April 4 to May 2 to fill the void left by the rescheduled Kentucky Derby, could be next.

“Right now it’s the only option out there we know of,” Cox said on America's Day at the Races, noting the impact of coronavirus on the sport. “So it’s either that or just kind of wait and see. Hopefully over the next couple of weeks some things will turn up in terms of the racing schedule for this spring and summer. Ultimately, we’re going to watch him and see how he does in his training moving forward.”

Wells Bayou previously earned four qualifying points for the Derby when running second in last month’s Southwest Stakes (G3) at Oaklawn Park. With 104 points in the bank, Wells Bayou is followed on the leaderboard by third-place Louisiana Derby finisher Modernist (70); Authentic (60), who is pointing to next month’s Santa Anita Derby (G1); Ete Indien (54), who’s scheduled to run in Saturday’s Florida Derby (G1); and Nadal, who could also return to Oaklawn for the Arkansas Derby after winning the Rebel Stakes (G2).

Wells Bayou is on pace to become the first Derby starter for Cox, a native of Louisville, Ky., who launched his training career in 2005 after serving as an assistant for Dallas Stewart. Cox, who won the 2018 Kentucky Oaks with Monomoy Girl, got a taste of the Triple Crown last year when saddling Owendale to a third-place finish in the Preakness Stakes.

Owned by Lance Gasaway, Clint Gasaway, Madaket Stables and Wonder Stables, Wells Bayou was a debut winner at Keeneland last fall. After failing to hit the board in his first try versus winners at Churchill Downs on Nov. 30, Wells Bayou came back in his sophomore bow to win an Oaklawn allowance in similar front-running fashion prior to the Rebel.