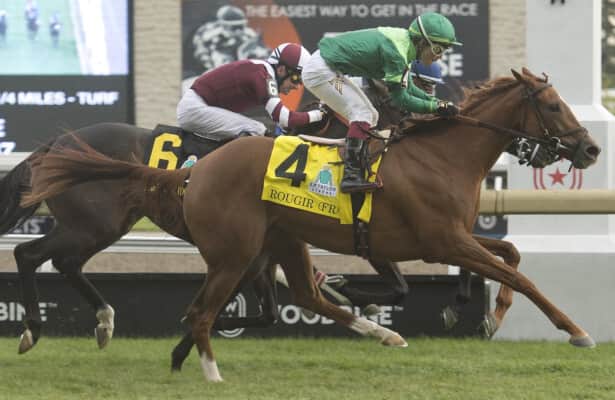 Rougir was full of run late to take top prize in the Grade 1, $751,900 E.P.?Taylor?Stakes Saturday at Woodbine.

The well-travelled 4-year-old chestnut filly’s first appearance at Woodbine turned out to be equal parts impressive and dramatic.

It was Adventuring, riding a two-race win streak, who went to the front in the 1 ¼-mile turf race for fillies and mares, 3-year-olds and up, as Lemista and Mylady picked up the chase in second and third, respectively. Rougir, with Kazushi Kimura in the irons, settled into seventh of nine through an opening quarter timed in 26.78 seconds, while Queen’s Plate and Woodbine Oaks winner Moira, the even-money choice, sat sixth.

Adventuring held a 1 ½-length lead at the half, reached in 51.39 seconds, as Mylady and Lemista continued to apply pressure on the frontrunner. Rougir, running comfortably in seventh, was then steadied at the nine-sixteenths, causing her to get knocked off stride and seemingly out of it as the field entered the turn for home.

While Rougir looked to get back into the race, Moira was guided to the rail and began to take aim at new leader Flirting Bridge.

Midway down the lane, Rougir came running with a determined outside bid, but still had plenty of work to do as the wire drew closer.

Under urging from Kimura, the Chad Brown trainee wouldn’t be denied, getting up to notch a neck victory over Moira. A subsequent claim of foul by the rider of Lemista demoted Moira to eighth, elevating Flirting Bridge into second, Fev Rover (IRE) to third and Adventuring into fourth.

“I had been struggling because this horse had moved me up so sharply that I had to pick a pathway,” said Kimura. “So, when he comes from the corner it was tremendous, I was trying so hard. I was so confident, but those horses already had experience from the long stretch.”

It was the sixth win, along with one second and three thirds, from 19 starts for Rougir, bred by Jan Krauze and owned by Peter Brant and Michael Tabor. It was also the first win since a three-length triumph in the Beaugay (G3) on May 14 at Belmont.

After competing in France, Rougir, a daughter of Territories-Summer Moon, started the North American leg of his racing career last November, with stops at Del Mar, Belmont, Saratoga, and Churchill.

The E.P.?Taylor?also was the final leg of Woodbine’s “Ladies of the Lawn,” a three-race turf?stakes?series for fillies and mares consisting of the Dance Smartly, Canadian and E.P.?Taylor.??

Fev Rover, second in the Dance Smartly, winner of the Canadian, and third in the E.P. Taylor, finished with 22 points for the Ladies of the Lawn bonus prize of $50,000. Points were awarded on a 10-7-5-3-2 basis for the top five finishers in each?stakes race,?with one point earmarked for other also rans.?