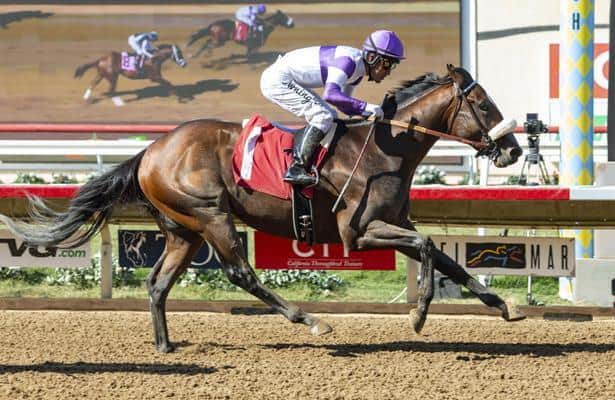 Listing made an impression in his debut, posting a 1 ¼-length win in the six-furlong I'm Smokin on August 31 at Del Mar. Cecil said the Square Eddie colt shipped in well to Belmont from California as he readies for the 147th running of the Champagne, a "Win and You're In" qualifier for the Breeders' Cup Juvenile on November 2 at Churchill Downs.

"He's always been mature for his age, that's why we ran him in a stakes the first time out," Cecil said. "He handled it better than I could have hoped. But he's flown before. He was in Florida getting ready for 2-year-old sales but we scratched him out of those and kept him. He's a pretty smart horse."

Not selling the California-bred could lead to big things. Listing will take aim at the one-turn mile, which his conditioner said better suits his skill set.

"We wanted to take a shot with him," Cecil said. "It was a choice between coming here or Kentucky, and I preferred the one turn for now. I think going from six [furlongs] to two turns is probably a little too much, so that's why we chose this race."

Listing drew post 6 in the 10-horse field. At 15-1 on the morning line, he will be ridden by Mario Gutierrez.

"He drew the rail the first time out, which can be the toughest place you can be, and he handled it very well," Cecil said. "He has some speed, but I don't expect him to be on the lead. I think he'll be a bit off the pace."

The Champagne has seen some of racing's all-time greats earn a trip to the winner's circle, including Triple Crown winners Seattle Slew and Count Fleet, as well as Hall of Famers Alydar, Spectacular Bid, Easy Goer, Riva Ridge and Buckpasser among others. A part of the "Road to the Kentucky Derby" series, the Champagne awards the top-four finishers with a points distribution of 10-4-2-1 towards the 2019 Run for the Roses.

"The hardest thing with all these 2-year-olds is that we don't know how good they are, but this time of year, it's hard to say," Cecil said. "It's time to test them out a little bit. It's a very prestigious race and it would be nice to do well in it. We're one race at a time, but he's done nothing wrong so far. This is a test to see where we fit. We can always go back down after, if we need to."