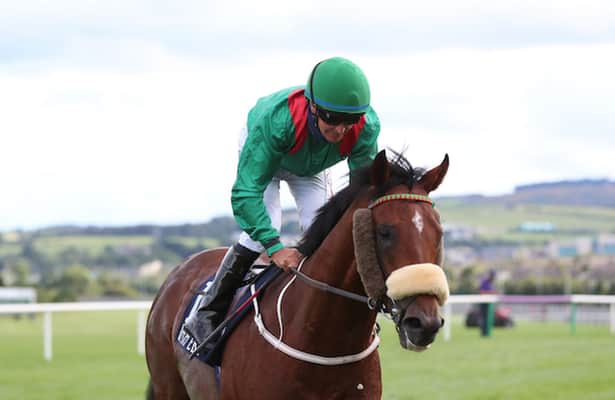 Trainer Dermot Weld said everything is a go for Tarnawa to defend her 2020 victory next month in the $4 million Breeders’ Cup Turf. The form is there. The confidence is there. The only question now is how dry the ground will be at Del Mar.

“The track is going to be my biggest concern,” Weld told Sky Sports in England. “It’s where the surf meets the turf, and it’s very firm.”

That concern has not stopped Weld from sending Tarnawa back to America, where she is the 2-1 futures favorite at Bovada to repeat in the race that she won last November at Keeneland.

Bred and owned by The Aga Khan, the 5-year-old Shamardal mare has raced only three times this year, winning a Group 3 comeback in August at Leopardstown. That was where she was the runner-up last month to the now retired St Mark’s Basilica in the Irish Champion Stakes (G1).

Then three weeks ago, Tarnawa practically swam to a finish a close second to 71-1 long shot Torquator Tasso in the sodden 100th running of the Prix de l’Arc de Triomphe (G1).

“The Arc took a fair bit out of her,” Weld told Sky. “But she’s an amazing animal with a wonderful constitution and huge determination. After a week when she was tired, she has bounced right back. I was pleased with a bit of work she did the other morning.”

Weld is expected to call on Christophe Soumillon to retain the ride on Tarnawa. That was his plan last year, too, before Soumillon was diagnosed with COVID during Breeders’ Cup week. That forced Weld to call on Colin Keane to take his place.

“I thought he would suit the filly very, very well,” Weld said in a separate interview with Racing TV. “I just thought that Colin’s patient style might have suited this filly despite his lack of experience riding on that track.”

Keane kept the ride for Tarnawa’s two races at Leopardstown before Weld went back to Soumillon for the Arc.

Last year’s victory in the Turf ended Weld’s 0-for-16 drought in the Breeders’ Cup. Because of the pandemic, Weld was not at Keeneland, leaving his son Mark to look after Tarnawa. That did not temper his excitement as he watched back home in Ireland late on that Saturday night.

“It’s the feeling of a job well done,” Weld told Racing TV. “It’s hard to put into words. It’s just a relaxation. It’s just you know you’ve achieved something that you’ve always wanted to do, because the Breeders’ Cup Turf is such a big race, such a valuable race for $4 million. I was just delighted for everybody concerned and delighted for the filly herself and for the whole team.”

Weld said Tarnawa would be one of about 35 Ireland- and England-based horses being flown next Monday to California.

Pre-entries for the Breeders’ Cup will be taken Monday and announced Wednesday.