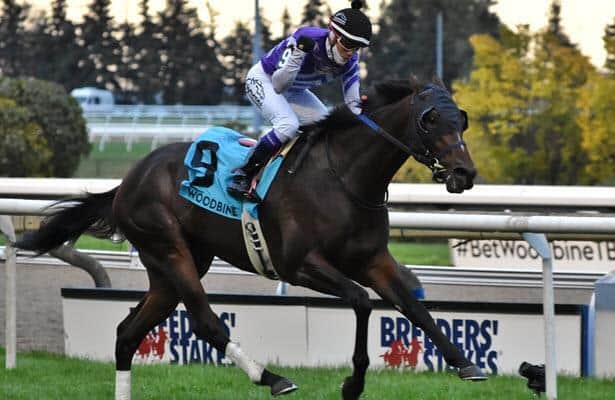 Below is the list of the weekend's graded stakes in chronological order, all times Eastern. Click on the race name for full entry table.

Woodslane Farm’s Sadler’s Joy will face fellow 7-year-old Grade 1-winner Aquaphobia in pursuit of a second straight triumph in the 60th running of the Red Smith Handicap going 1 3/8 miles over the inner turf. Trained by Tom Albertrani, Sadler's Joy has amassed the highest amount of lifetime earnings in the field with $2,648,160 through a record of 33-7-4-11 consisting of four graded stakes triumphs.

The veteran son of Kitten’s Joy notched graded wins during his 4, 5 and 6-year-old campaigns. In addition to last year’s Red Smith, Sadler’s Joy boasts triumphs in the Sword Dancer Invitational (G1) in Aug. 2017 at Saratoga and Gulfstream Park's Pan American (G2) in Apr. 2017 and the Mac Diarmida (G2)in March 2018.

C R K Stable’s Midcourt, the defending champion in Saturday’s $100,000 Native Diver Stakes, looms as the one to catch and the one to beat in the 42nd edition of the nine-panel headliner. Midcourt, a gelded 5-year-old by Midnight Lute, has won five of his 14 starts, including his five and three-quarter length triumph in last year’s Native Diver.

The John Shirreff’s-trained runner – a winner of $546,695 in purses -- has been handled by Victor Espinoza in most of his career starts and will have the Hall of Fame rider in the tack again Saturday.

Queen’s Plate and Prince of Wales Stakes winner Mighty Heart will meet up with stablemate and Breeders’ Stakes victor Belichick in the Ontario Derby, set for 1 1/8 miles on the Woodbine Tapeta.

After Mighty Heart took the first two legs of the Canadian Triple Crown series, Belichick turned the tables on the bay colt in the 1 ½-mile Breeders’ Stakes on October 24, putting an end to Mighty Heart’s quest to become the country’s first horse to sweep all three races since Wando achieved the feat in 2003. The Ontario Derby, for three-year-olds, will mark the first race for both since the Breeders’.

Multiple graded stakes winner Finite tops the 35th running of the Chilukki Stakes run at one mile. Finite, a 3-year-old filly by Munnings, was the narrow runner-up finisher behind Venetian Harbor in last month’s Grade 2 Raven Run at Keeneland.

Multiple stakes winner and 2017 Canadian Horse of the Year, Pink Lloyd, looks to add to his black-type bonanza with a win in the Kennedy Road Stakes. Pink Lloyd will seek to top the Kennedy Road charts for the third time, having won the event in 2017 and 2019.

Trained by Robert Tiller for Entourage Stable, the eight-year-old gelded son of Old Forester is unbeaten in four starts – all stakes – this year. His latest tour de force was a victory in the Grade 3 Vigil Stakes (G3) on Sept. 5, an effort that pushed Pink Lloyd’s career earnings over $2 million (CDN). It was also his fourth straight Vigil Crown.

The $175,000 Bessarabian Stakes for fillies and mares contested at seven furlongs on the Tapeta features defending race winner Amalfi Coast. The chestnut filly won last year’s edition of the race to earn her first graded stakes score and enters off a victory last time out in the Oct. 23 Sweet Briar Too Stakes.

Nine 2-year-olds, including impressive first-time winner Haddassah, are set to contest Sunday’s Grey Stakes. Haddassah, a bay son of Air Force Blue, didn’t fly under the radar in his curtain-raising effort on November 1. Trained by Kevin Attard, the Ontario-bred went off as the 9-5 choice in the 1 mile and 70-yard main track maiden special weight event, a race that was originally scheduled for the turf.

Mark Casse, who has seven Mazarine titles, has two opportunities to add to that impressive total, Sunday. The 1 1/16-mile Mazarine has attracted a field of seven two-year-old fillies, including Casse charges Souper Sensational and Sleek Lynx. Owned by Live Oak Plantation, Souper Sensational has lived up to her name over two starts, including a fantastic four-length display in the Glorious Song Stakes on October 17 at Woodbine. Sent on her way as the 3-5 choice, the chestnut daughter of Curlin widened her advantage down the lane, going on for the easy score in a time of 1:21.84 over seven furlongs on the Woodbine Tapeta.