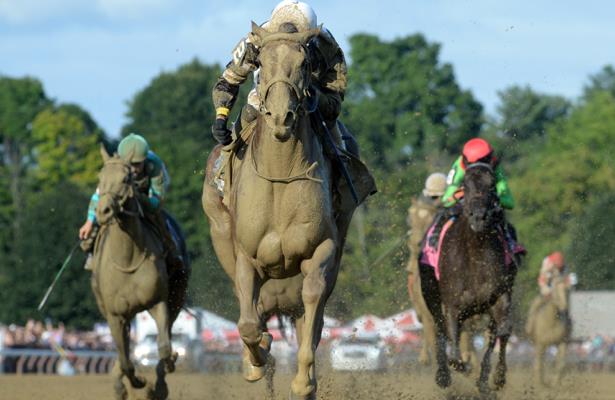 Each weekend, Horse Racing Nation previews the top races to tune into coast to coast and runs down the main contenders. Post times are all in Eastern Time, with this edition covering Sunday's races, many of which will air from 4:30-6 p.m. ET on NBC.

Reigning Cartier Horse of the Year Enable will attempt to repeat in the Prix de l’Arc de Triomphe (G1) at Paris Longchamp. It will be only her second race of the season after a delayed start due to a knee issue. The 4-year-old filly received time off after winning last year’s Arc. Instead of making her spring return, she made her seasonal debut in the September Stakes (G3) at Kempton Park going 1 ½ miles over synthetic. The victorious return showed she is ready for the same distance in the Arc, but she will also be facing a handful of Group 1 European winners. Post time is 10:05 a.m.

Fourstar Crook the one to beat at Belmont Park

Belmont Park has three stakes carded for Sunday, all three Breeders’ Cup qualifiers. Highlighting the card is the Flower Bowl (G1), a prep for the Filly and Mare Turf (G1). Chad Brown-trained Fourstar Crook leads the field. From four starts this season, Fourstar Crook won the Hillsborough (G2), was second to Sistercharlie in the Jenny Wiley (G2), beat her stablemate in the New York (G2) and was second to her again in the Beverly D. (G1).

The Frizette (G1) will send a 2-year-old filly to the Breeders’ Cup Juvenile Fillies (G1) and includes a competitive field. Runaway debut winners Covfefe and Graceful Princess, a daughter of Havre de Grace, receive the chance to step up. They will face Adirondack (G2) winner Sue’s Fortune.

The Futurity (G3) is a “Win and You’re In” for the new Breeders’ Cup Juvenile Turf Sprint (G1). Trainer Wesley Ward has the morning line favorite in the filly Dragic, who will take on boys. Dragic broke her maiden on dirt, ran fourth in the Sorrento (G2) and switched to turf to finish third in the Kentucky Downs Juvenile. She cuts back in distance for the Futurity.

Keeneland’s Spinster will impact the Distaff

The Juddmonte Spinster (G1) serves as an important Breeders’ Cup Distaff (G1) prep with Elate out and Abel Tasman having flopped in the Zenyatta (G1). Eskimo Kisses and Blue Prize appear to lead the way. After being competitive in 3-year-old filly stakes, Eskimo Kisses scored in the Alabama (G1) over Midnight Bisou. Blue Prize enters off two wins at Churchill Downs in the Fleur de Lis (G2) and the Locust Grove (G3).

War of Will is a strong favorite for the Dixiana Bourbon (G3), a “Win and You’re In” for the Breeders’ Cup Juvenile Turf (G1). The colt has not won yet in two starts but comes off an impressive runner-up finish in the Summer Stakes (G2), in which he was just caught by Fog of War. He was third on debut.

Impressive Saratoga maiden winner Nitrous makes the switch to turf in the Indian Summer Stakes. He won by 3 ¼ lengths on the dirt before finishing third in the Hopeful (G1). The Indian Summer winner will receive a spot in the Breeders’ Cup Juvenile Turf Sprint.

Santa Anita’s Sunday card is highlighted by the L.A. Woman (G3). Grade 2 winner and former claimer Skye Diamonds will try to return to last year’s form. She has been winless in five starts this year, but has hit the board four of those times. Also with a good chance in the L.A. Woman is Yuvetsi. The filly earned her biggest career victory last out in the Rancho Bernardo Handicap (G3) and won her first stakes, the Santa Lucia, two starts earlier over the summer. Santa Anita also has the Swingtime Stakes carded, a restricted stake for fillies and mares 3 and up going a mile on the turf.