Weekend Takeaways: Right call made for Battle of Midway 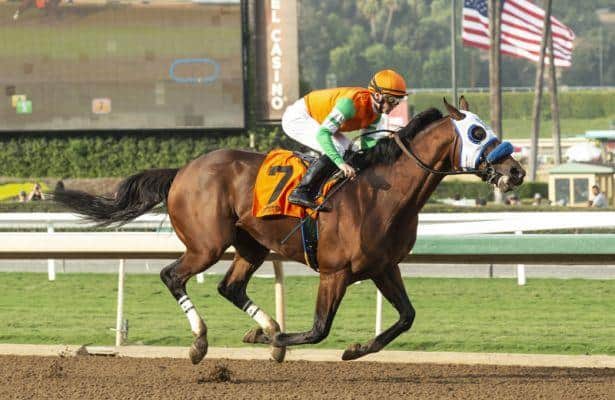 Battle of Midway gave a glimpse of what could come next in his Comma to the Top Stakes victory Sunday at Santa Anita. Since his return to training after proving subfertile at stud, the Comma to the Top was the first time the reigning Breeders’ Cup Dirt Mile champion looked like his old self.

In the Pat O’Brien (G2), Battle of Midway looked tired in his distant runner-up effort to Catalina Cruiser and he never made a run after a troubled rail trip in the Kelso Handicap (G2), where he finished fifth. Sunday, he was able to sit off the pace and kick away in the stretch, winning by 4 ½ lengths.

The Comma to the Top appeared to be the confidence boost he needed, and the decision to skip the Breeders’ Cup paid off. Catalina Cruiser will likely be Battle of Midway’s main competition next year with Accelerate and City of Light both set to retire. And, if Catalina Cruiser continues to run like he has in his short career, he could be on his way to becoming the West Coast’s next big horse.

Catalina Cruiser is also expected to be the favorite in the Breeders’ Cup Dirt Mile on Saturday, Nov. 3. City of Light, likely to run in the Dirt Mile over the Classic, will also be a primed contender. Instead of going up against the best, the Comma to the Top allowed Battle of Midway to set himself up for bigger things to come and face Catalina Cruiser down the road when the screws are tightened.

Trainer Jerry Hollendorfer and owners WinStar Farm and Don Alberto Stable made the right call here, giving their horse the best chance instead of sending him into an even bigger challenge. They knew he preferred two turns compared to one -- and the Dirt Mile is run at one turn at Churchill Downs -- and they wanted to prepare him for future races. Currently they are eyeing the Native Diver (G3) and San Antonio (G2) and, if Battle of Midway continues to progress, the Pegasus World Cup could be on his agenda.

At 7 years old, Winx is still running at the top level and beating everyone that comes her way. She made history by winning her fourth consecutive Cox Plate – more wins in the premier Australian race than any other horse – and won her 29th straight race in doing so. It was also her 22nd Group 1 win. The Australian champion has done things unseen in the modern age of U.S. Thoroughbred racing and has built a worldwide fan base.

The question has been asked many times before: Is she great if she doesn’t race outside Australia? Considering all the has been able to do, yes, she is great. Connections have opted out of engagements such as Royal Ascot and Winx has never been to the Breeders’ Cup, but her record smashing performances prove her talent.

In this year’s Cox Plate, she faced a tough competitor in Benbatl, a horse who has won Groups 1s in Europe, Dubai and Australia. If not for Winx, Benbatl would have picked up another Group 1. Instead, he finished a respectable second as Winx received crowning glory.

Despite not taking her talents outside her home continent, Winx continues to defy the odds and win and win and win. And for as long as she has been at it, she should be considered great.

Reward for all of your hard work. @cwallerracing team, you deserve this! pic.twitter.com/9uCSBLeVWU

Hofburg missed the mark this season

For Hofburg, his 3-year-old season has been filled with both potential and missed targets. He was made the favorite over older competitors in Keeneland’s Fayette Stakes (G2) Saturday, but faded to sixth of seven when turning for home.

The effort followed his fourth-place run in the Pennsylvania Derby (G1), where he was a close second choice behind favorite, and winner, McKinzie.

Hofburg has placed in Grade 1 company twice now, but has not broken through in graded stakes after five attempts. After breaking his maiden in March, he ran in three consecutive Grade 1 races, finishing second in the Florida Derby, seventh in the Kentucky Derby and third in the Belmont Stakes. He then dropped in class to win the restricted Curlin Stakes by five lengths.

His Curlin victory was visually impressive, but he has not reproduced that performance yet. And, after his Fayette run, his odds will likely be going back up next time he’s against graded stakes winners.

Rags to Riches Stakes can help build a foundation for fillies

Monomoy Girl won the Rags to Riches Stakes at Churchill Downs a year ago. The victory set her up for an even bigger 3-year-old season. This year she has won multiple Grade 1s in the Ashland, the Kentucky Oaks, the Acorn and the Coaching Club American Oaks. She also would have won the Cotillion over Midnight Bisou if not for a disqualification.

Sunday, another promising young filly shook off competitors for her first stakes victory. That filly is West Coast-based Mother Mother, a name that caught attention from the Bob Baffert barn during the Del Mar summer meet.

Mother Mother, well beaten by Bellafina in the Del Mar Debutante (G1), dug in with the addition of blinkers in the Rags to Riches. If she lives up to the potential she’s shown so far, she could help bolster the Rags to Riches as a race for developing fillies.

This was only the sixth year the Rags to Riches has been run, but if Mother Mother goes on to win big races, she and Monomoy Girl can certainly help put this race on the map.

And, if a Rags to Riches winner continues on to the Kentucky Oaks trail, it doesn't hurt to say you have experience over the Churchill Downs track.

Mother Mother in the paddock today @ChurchillDowns. The Bob Baffert-trained Pioneerof the Nile filly won the Rags to Riches Stakes on the Opening Day card known as Stars of Tomorrow I, featuring all 2-year-old races. pic.twitter.com/S0gevyPw3p