Weekend Takeaways: Battle of Midway has fight left in him 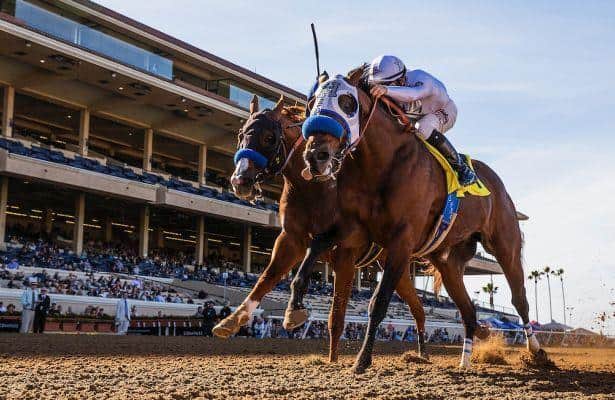 Battle of Midway’s journey has been unconventional. He won the Breeders’ Cup Dirt Mile at 3 a year ago, retired to stud, proved subfertile and returned to the racetrack. Sunday he won his second race in four starts since returning this year, holding off Dabster in Del Mar's Native Diver (G3).

The competition was not stacked against him. He faced only two competitors in Dabster and Isotherm, and the feature unfolded more like a match race. Dabster took it to Battle of Midway early, but the Breeders’ Cup champ came right back. Despite the small field, Battle of Midway showed he still has fight left in him. It’s that characteristic that helped him put away older rival and top miler Sharp Azteca in the Breeders’ Cup.

“They rode a good tactic trying to beat us, but he showed some guts,” trainer Jerry Hollendorfer said after the Native Diver. “Sometimes they have to. In the end, we were a neck ahead and that worked out for us. (Battle of Midway) is very businesslike and this will get him ready for his next race.”

Battle of Midway has not faced full fields or Grade 1 company since returning to the races. Possible targets include the Pegasus World Cup (G1) and the Godolphin Mile (G2), where he’ll have to travel and compete against more seasoned horses. He is expected to stay in California for his next start, the San Antonio (G2).

Whether he can run at the top level again or not is still to be seen, but for a horse who was retired and sent back to training, the Native Diver looks like a checkmark Battle of Midway can move forward with.

Trainer Brad Cox notched a major Grade 1 at his Churchill Downs base Friday when Leofric kept Bravazo at bay to win the Clark Handicap. The 5-year-old son of Candy Ride also became the second Grade 1 winner Cox has trained. Monomoy Girl awarded him his first Grade 1 this spring in the Ashland Stakes, followed by the Kentucky Oaks, the Acorn Stakes, the Coaching Club American Oaks and the Breeders’ Cup Distaff.

While Monomoy Girl showed a lot of talent from the start, Cox has brought Leofric through the ranks. After almost a five-month break this year, Leofric won an allowance optional claimer at Prairie Meadows before he scored his first stakes victory in the West Virginia Governor’s Stakes (G3). He ran third in the Woodward (G1), rebounded to win the Fayette (G2), then broke through at the top in the Clark.

“He ran really well after running most of the summer and not missing a beat,” Cox said. “He ran hard in the Fayette and I was a little concerned he may be coming back a bit too quick… We’ll maybe look at the Oaklawn Handicap or something like that down the road. We’ll see how he comes out of things. I’m really proud of his effort. He’s really turned the corner over the summer and become a top-quality horse.”

While the Clark lacked any division leaders or Grade 1-winning 3-year-olds, Leofric announced himself as a horse to keep an eye on in the older horse division. The effort was also enough for Cox to say the Pegasus World Cup is a possible spot, depending on how the horse develops over the winter.

Leofric has showed he is a talented horse, but is appears to be Cox’s patience that helped bring that talent out.

Signalman one to watch in 3-year-old Derby preps

Cairo Cat was the first breakout 2-year-old for trainer Kenny McPeek this year, picking up a win in the Iroquois on the Kentucky Derby 2019 trail. When Cairo Cat needed time off and missed the Breeders’ Futurity (G1) and Breeders’ Cup Juvenile, Signalman made a name for himself.

Signalman was knocking on the door for a breakthrough victory, and he finally got it in Saturday’s Kentucky Jockey Club (G2). His background doesn’t scream future Kentucky Derby horse, but he’ll be one to keep an eye on when the 2019 preps start up.

Signalman is the leading progeny for his sire General Quarters. The colt was only a $32,000 yearling purchase and has bankrolled $448,990. In addition to his Grade 2 score, he is twice Grade 1-placed. He was second in the Breeders’ Futurity and outran 67-1 odds to earn third in the Breeders’ Cup Juvenile.

“He’ll get a little rest, probably at Payson Park for about a month,” McPeek said after the Kentucky Jockey Club. “Then, we’ll ease him back into things and look at races like the Blue Grass down the road. We’ll let him tell us but obviously the big one is in May.”

Signalman has been consistent so far in the big Derby preps for 2-year-olds. The Blue Grass (G2) is the final major Derby prep in Kentucky and runs in April at Keeneland, a track Signalman has proven himself over.

From six starts, Restless Rider, another McPeek trainee, has three wins and three seconds. She had a tough loss Saturday in the Golden Rod (G2), missing 27-1 shot Liora by a nose.

It’s hard to knock the Distorted Humor filly. She won her debut and the Debutante Stakes before finishing second in the Spinaway (G1), her only race outside of Kentucky. Restless Rider returned home to win the Ashland (G1) before running second in the Breeders’ Cup Juvenile Fillies and Golden Rod.

Saturday’s race was not easy. Liora got away with slow fractions over a sloppy track and Restless Rider went wide when gearing up around the turn for home, barely missing in the final jumps. The accomplishment shouldn’t be taken away from Liora, though. The Golden Rod was a game effort in her stakes debut. Her connections – trainer Wayne Catalano, jockey Channing Hill and owner Coffeepot Stables – won the race two years ago with Farrell, who turned into a multiple graded stakes winner.

Even with the loss, Restless Rider put in a strong season. If all goes well and she continues to run in top form, she could be on her way to the 2019 Kentucky Oaks.