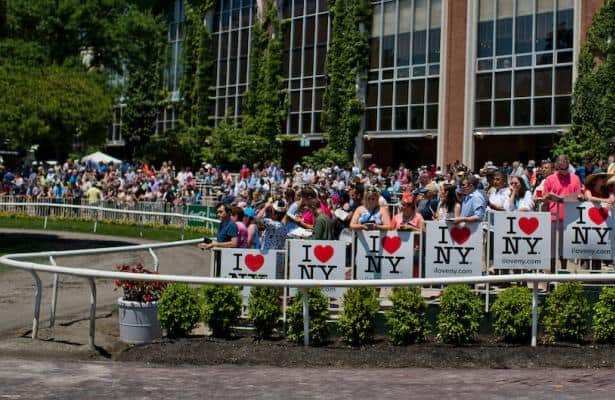 Jockey and trainer patterns are more familiar too, and factors such as pedigree become easier because the bloodlines are more well-known.

Race 5 on Wednesday is a one-mile race for New York-bred maidens. A couple of these young horses look promising, but one might really move up.


#6 Odin’s Steed (10-1) – The numbers on this 3-year-old Violence colt are light, but there are a couple of positive factors to point out. For one, his two races came in December and October of last year, and it is June now. Young horses mature and get stronger, even during a layoff, so the 83 and 80 TimeformUS Speed Figures cannot be held against him too much. He actually closed well while earning the 80, coming from out of the picture to finish a closing third. Now, Charlton Baker puts Joel Rosario on him, and the trainer/jockey combination hits at a high 30-percent.

#4 Surface Strike (3-1) – Four-year-old runner deserves space for earning a 100 TimeformUS Speed Figure last time, while on the pace against a closer-biased surface (the race is coded in dark blue). While he faded to fourth in that sprint, he can be forgiven because of the fast pace. He stretches out to a mile now. With Smart Strike on top and Touch Gold on the bottom, the distance should be fine. However, it is a concern he flopped in his career debut going long on turf.

#5 Local Counsel (5-1) – Horses making their second career start are always dangerous. Many trainers use the initial start as a learning experience for their runner, and this one certainly got one running wide and getting forced out in the stretch run by Panic Attack. While he faces the same foe, he also gets a dry track. He should improve.

#9 Panic Attack (6-1) – Anyone using TimeformUS can see his 99 and 103 Speed Figures are good enough to win this race. Gary Sciacca does not sport the best statistics for bettors who use trainers in the analysis. At 6-1 though, consider.


#7 Preternatural (10-1) – He gets some space because of trainer Christophe Clement. When paired when Kendrick Carmouche, the pair hits 38-percent (out of 21). As for the horse, well, he needs to move up quickly after scoring a 76 TimeformUS Speed Figure in his career debut. This is a #190k Ghostzapper colt out of a Pulpit mare.

Those who still want to make a more complicated wager can at least use the given analysis above to help include horses.