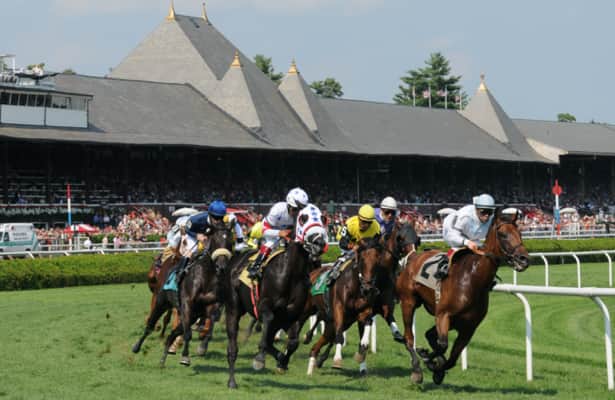 Saratoga has carded 10 races for Wednesday afternoon, with six scheduled for the grass, including an allowance hurdle event to kick things off. Hopefully those will stay on the turf after Monday and Tuesday rains.

Here are my five favorite plays for Wednesday’s program at the Spa, where the card is anchored by the Tale of the Cat Stakes.

No. 3 Offutt Cole (5-2) ran a career-best speed figure in his most recent race at Saratoga, finishing an isolated second at this exact class level, and he threatens to take this group gate-to-wire. No. 5 Drink the Wind (1-1, morning-line favorite) faded in his most recent try going seven panels but takes a precipitous class drop for Wayne Catalano, who wins at 23 percent with this move. No. 4 Readyseekgo (5-1) found one mile too far against similar foes here on opening weekend but hit the board in four of his last five sprint starts at Gulfstream.

No. 9 Inflation Adjusted (4-1) might have needed his last off the bench, so the aggressive drop in class for Chad Brown as he vies for the leading trainer title doesn’t appear to be suspicious. If runs back to his maiden breaker from last fall, he can beat these. No. 2 Parquetry (5-1) hinted at talent in the maiden ranks before finding allowance company too tough. The class relief should help immensely. No. 8 B C Glory Days (15-1) was a narrowly beaten second in his lone turf route try, albeit in the maiden claiming ranks. He’s worth a shot at 15-1 to try to sneak into the exotics while getting in light under apprentice Jose Gomez.

No. 2 Just Say When (5-2, morning-line favorite) finally gets a chance to string two starts together in this heat. Despite three straight runner-up results, this one looks like a solid wager with Irad Ortiz Jr. and Wesley Ward in his corner. No. 5 Starrystarryknight (5-1) followed up his maiden triumph with a fast-closing third-place result in a similar spot at Saratoga despite an eight-wide trip. He just needs to make up 3/4 lengths on the top choice here. No. 4 Fore Harp (10-1) will be rolling late under Jose Lezcano if his turf debut at Saratoga on July 23 is any indication.

No. 11 Timbuktu (4-1) broke his maiden at Saratoga and was a narrowly beaten second at this class level when last seen. He has the speed figures that make him capable of atoning in this spot for Brad Cox. No. 8 Front Line Dancer (7-2, morning-line favorite) gave up the lead in a late stretch duel at this course and class level when last seen – the cutback to one mile may suit. No. 3 War Terminator (5-1) returns off a December layoff as a gelding, adds blinkers for Jonathan Thomas, and gets Luis Saez aboard – lots to like.

No. 7 Running Bee (4-1) will be hard to beat if he improves in his second start off a long layoff. He earned a big speed figure in his most recent start despite encountering some traffic trouble for Brown. No. 4 Evan Harlan (9-2) is beginning to make a habit of settling for minor awards but is tough to leave out entirely. No. 2 Tiz a Giant (10-1) was a game runner-up going longer over this course on opening day – scaling back in distance and switching to John Velazquez might help.