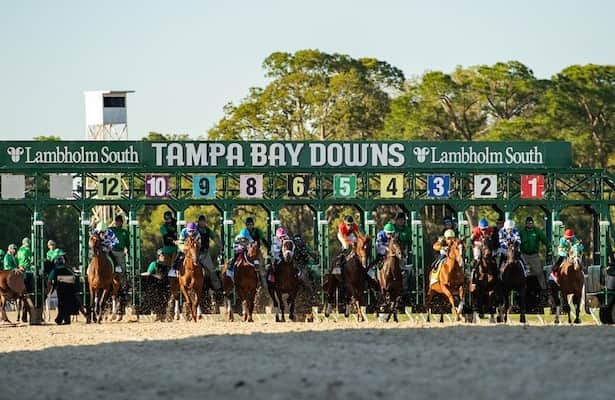 Tampa Bay Downs will put on an intriguing nine-race program for the opening Wednesday of 2023. Here are my top five plays for the card.

No. 4 Flag Woman (8-5, morning-line favorite) has won two in a row, including a victory at this level over principle contender No. 2 Astonishing Anabel (2-1) going six furlongs at Tampa Bay Downs last month. The stretchout to seven panels may enhance her chances at another victory. Astonishing Anabel previously won at this level before settling for second last time out. She adds Lasix for red-hot trainer Jorge Delgado (33 percent). No. 6 Glass Star (6-1) brings in decent form from Gulfstream and adds Lasix – consider under Samy Camacho (23 percent).

No. 5 Eau Claire (3-2, morning-line favorite) has hit the board in her last two tries against maiden claimers – the third time could be charm against what appears to be a very weak field. She adds blinkers, an 18 percent move for trainer Arnaud Delacour, who names Daniel Centeno to ride. That pairing has won three of their last five races together. No. 3 The Sweaty Fox (3-1) gets Jesus Castanon aboard for her second try at this level. If she settles better than she did last time, hitting the board is a distinct possibility. No. 8 Syllabus (10-1) was a game second in her most recent turf race, so consider underneath despite her 0-for-29 career record (0-for-11 on grass).

No. 2 I’m Nervous Now (6-1) appeals at a price in her initial turf try for Michael Dini, who’s clicking at 19 percent for the meet. Dini claimed this daughter of Animal Kingdom himself on Nov. 27 and oversaw one stiff breeze for her on Dec. 24. Putting her in a starter allowance rather than a straight claiming race signals confidence, and Antonio Gallardo sees fit to climb aboard. No. 3 Investment Income (8-5, morning-line favorite) has settled for minor awards in each of her first three tries against winners – logical on speed figures, but tough to trust at this price while stepping up slightly. No. 5 Dry Humor (7-2) shows a steady string of bullet works for her first start since October – worth a long look trying turf and invading from Gulfstream.

No. 5 I Am That I Am (5-2, morning-line favorite) dropped to a new low and nearly rallied for the win last time out – a big threat wheeling back here if he can repeat it. No. 1 Shimmering Light (9-2) was a decent third going seven furlongs against similar at Tampa Bay last time out – note his two route wins from earlier this year at Monmouth. No. 2 Watch for the Lute (7-2) finished well behind the top choice when last seen but doesn’t have much to beat to land third here.

No. 1 D’craziness (6-1) had an uninspiring summer at Presque Isle Downs, posting a 6: 0-0-2 record on their synthetic surface. But his 36: 11-9-2 record on turf (22: 7-5-2 at Tampa Bay Downs) – including a win here as recently as last March – is much stronger. If the 10-year-old still has something in the tank, he could prove to be a bargain at these odds. No. 2 Bird’s Eye View (2-1, morning-line favorite) has won two straight heats to bring his record up to 7-for-58 lifetime. Did this 9-year-old just get lucky, or has Dini discovered something about him recently? Pablo Morales retains the assignment. No. 7 Joe Phillips (5-1) tried to speed away going nine panels last time out but faded in the lane – note the quick turnaround time, which might not be a bad thing while scaling back.