Wednesday Wagers: 5 races are worth a bet at Horseshoe Indy 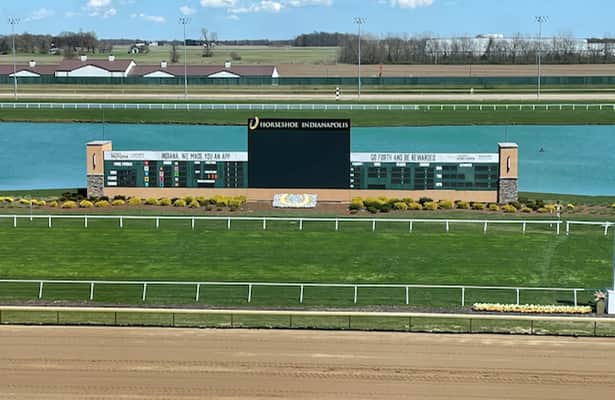 Horseshoe Indianapolis’ 11-race Wednesday program is highlighted by a pair of state-bred stakes, including the $100,000 Checkered Flag for fillies and mares going six furlongs. Let’s take a look at five of the nine thoroughbred events on the slate.

No. 3 Thunder Love (9-5, morning-line favorite) was a game second against tougher at Churchill when last seen – major win threat if she can replicate that race over this course. No. 7 Fair Game (5-2) is a logical alternative scaling back in distance and dropping in class. She won her lone start at Horseshoe Indianapolis last autumn. No. 2 Cat Attack (6-1) drops out of a third-place effort going longer in a state-bred stake at Hawthorne. She won her most recent turf sprint try.

No. 1 Pure Tap (12-1) steps up from the maiden ranks but appears ready to move forward in his third start off the bench. The prep work was solid, and Samuel Bermudez rides for Kim Hammond, a 24 percent team over the last two months. No. 4 Superduty Justice (5-2, morning-line favorite) is 1-for-16 lifetime but hard to leave out of the exacta after compiling back-to-back runner-up results in his last two starts for a tag. #5 Captain Harvey (6-1) should come rolling late for a share under meet-leading rider Marcelino Pedroza in his first try in the claiming ranks.

No. 5 Rule the Empire (5-1) figures to make an impact on the class drop and lures Vincent Cheminaud, who’s off to a solid start at the meet (14: 4-2-2) No. 8 Big Paper (2-1, morning-line favorite) has settled for place in four of his six lifetime starts but must be respected on speed figures. Tom Amoss – winning at 36 percent at Horseshoe Indianapolis – removes the blinkers and names Joseph Ramos (19 percent at the meet) to ride. No. 6 Stirling’s Gold (12-1) takes a much-needed descent in class – consider underneath.

No. 11 Scotty’s On Edge (3-1, morning-line favorite) is 2-for-2 sprinting, but lost his lone route start to date. However, that effort was against classier foes, and in the mud. Emmanuel Esquivel should guide this one home first on a fast strip. No. 5 Rotary Dial (6-1) won his lone route try over this course two-back and fits with these on speed figures. No. 7 Classic Max (4-1), and No. 10 Daaher Street (8-1) were separated by just a half-length when they last met here on June 11, include underneath.

No. 2 Hungarian Princess (5-2, morning-line favorite) has never missed the exacta in seven starts going six panels (7: 4-3-0) and carries a 12: 6-4-0 record at Horseshoe Indianapolis into this contest – short price looms. No. 5 Poetic Verse (7-2) has won three of her first four career starts by multiple lengths but has never been this far – dangerous on the class hike. No. 7 Chandana (6-1) had a seven-race in-the-money streak snapped when facing tougher at Hawthorne last time out but drops back in with state-breds here.