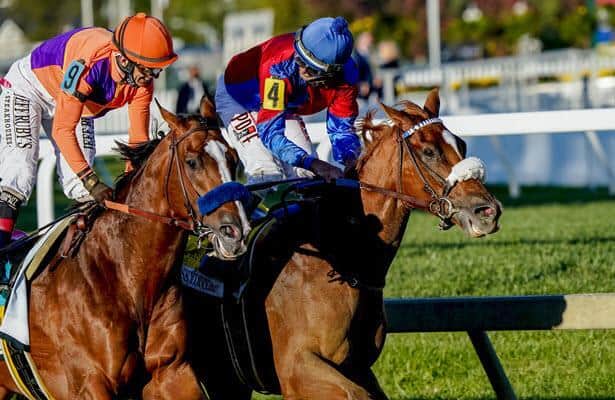 As challenging as 2020 was on so many levels, the successful completion of the racing season brought some consolation and a large number of feel-good stories. Here are 10.

Doubly delightful. Spendthrift Farm continued a year-long spending spree when it acquired Monomoy Girl for $9.5 million and Got Stormy for $2.75 million and promptly announced that both stars will return for their 6-year-old campaigns. Bravo to all of those who are willing to keep sound veterans in training. The sport desperately needs more of that.

Aftercare aid. The Thoroughbred Aftercare Alliance announced in late November that it had awarded $3.5 million in grants to 81 Thoroughbred aftercare organizations. Since the TAA’s inception in 2012, it has awarded more than $20.7 million to accredited organizations. Even in the hardest of times, TAA supporters remained generous.

Benevolent queen. Marylou Whitney, hailed as the “Queen of Saratoga” during her lifetime, continued to aid the backstretch workers she so admired even in death. Her widower, John Hendrickson, arranged for more than 1,700 of her personal items to be auctioned off this summer to raise money for backstretch facilities at Saratoga Race Course. The effort brought in about $400,000. Reminders of Mrs. Whitney’s generosity can be found throughout her beloved Saratoga Springs. “She will never die,” Hendrickson said. “You look around Saratoga, and she is everywhere.”

Swiss treat. Owner Peter Callahan, 78, was forced to watch the vast majority of Swiss Skydiver’s races from a distance due to what he described as a severely compromised immune system. Among other races, Callahan did not attend when Swiss Skydiver outdueled Kentucky Derby winner Authentic and became only the sixth filly to win the Preakness in that race’s 145-year history. But she still provided Callahan and members of his family – not to mention her many fans – with memories they will forever cherish.

Double the fame. Mark Casse, already a member of Canada’s hall of fame, was elected to the National Museum and Racing Hall of Fame this year. Casse had not won a Triple Crown race until he broke through in a big way in 2019, with War of Will capturing the Preakness and Sir Winston the Belmont Stakes.

Great decision. Since Keeneland Race Course had the bad luck of hosting the Breeders’ Cup World Championships during the pandemic, Breeders’ Cup Ltd. made an excellent decision when it announced that the season-culminating event will return to Keeneland in 2022. No area anticipates the Breeders’ Cup more than Lexington, and arguably no track is a finer host. Keeneland unfailingly delivers customer service with a smile.

Great decision II. Tom Drury Jr. waited a lifetime for a horse as good as Art Collector to enter his barn. But when his standout 3-year-old developed a minor foot issue, Drury never hesitated in putting the horse first and scratching him from the Kentucky Derby.

Missing piece. John Velázquez, the career leader with more than $430 million in purse earnings, filled in one of the few holes in his otherworldly resume when he teamed with Kentucky Derby winner Authentic for his first Breeders’ Cup Classic victory. It was his 18th Cup win overall.

Sackatoga sweep. It is always great to see operations succeed without spending millions. Sackatoga Stable, managed by Jack Knowlton in upstate New York, is one of those outfits. The partnership sent out New York-bred Funny Cide, a $75,000 private purchase as a 2-year-old, to win the 2003 Kentucky Derby and Preakness. It picked up the missing piece when another New York-bred, Tiz the Law, a $110,000 yearling, delivered in this year’s Belmont Stakes.

Worth keeping. Most owners of prized Thoroughbreds look to sell them to the highest bidder as soon as they feel they have maximized the horse’s value as a runner. Not Joel Politi, an orthopedic surgeon in Ohio. Undoubtedly, Politi turned his back on a hefty sum when he opted to retain 2019 Kentucky Oaks winner Serengeti Empress as a broodmare. His top priority is to ensure that she will be well cared for the rest of her life.